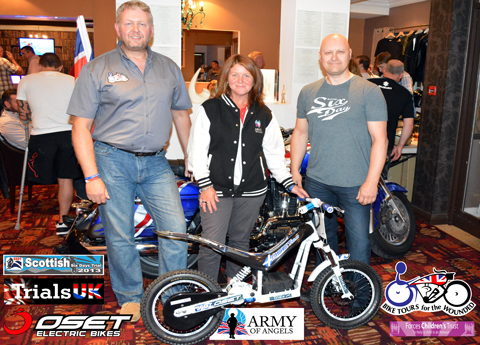 This years SSDT charities had a great help raising money thanks to Oset bikes and Trials UK. A one off special edition "Scottish" electric bike was offered as an incentive for people to donate to two very worthwhile causes. We managed to raise over £2000 and the lucky winner, Karen Shaw, is seen here being presented with her prize at a recent Bike Tours for the Wounded gathering in Derby. Pictured is Darren Clover of B.T.F.T.W, Karen Shaw and Nige Pearson of Trials UK.

The bike has been very kindly donated by Ian Smith, the owner of Oset Bikes, and extensively customised by Trials UK with the help of Frazer from All Signage of Skipton. Every penny raised went to this year’s chosen charities which are “The Forces Children’s Trust” and “Bike Tours for the Wounded” whom both really make a difference to the lives of the injured and the families of those sadly lost in conflict.

The special SSDT Oset had pride of place at the head of the Sunday parade of 275 bikes through the High St of Fort William, ridden by Trials UK's team rider George Hemingway along side the Bike Tours for the Wounded's "Respect" bike.

After the parade a draw was held to pick the winner and Rhoda Rathmell, wife of Malcolm Rathmell, kindly picked out the lucky winning number of 218 which belonged was Karen Shaw. Karen works hard at the charity organisation "Army of Angels" also raising money for forces charities. In fact Karen, being the completely selfless person she is, tells us she is going to auction the bike off to raise more money to help British services personnel, and their family's, whom have sadly been seriously injured in conflict.

Their great work can be helped here at  http://www.armyofangels.org.uk/ so please dig deep and help make a difference and you may be in with a chance to win this one of a kind OSET bike!