All Aboard For Red Bull City Trial 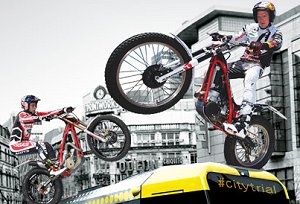 This Saturday will see eight of the World's best motorcycle trial riders compete in Manchester as the Red Bull City Trial returns to the capital of the north west for the second edition of this innovative event. Twelve times FIM Trial World Champion Dougie Lampkin will be joined by fellow Red Bull athlete and current vice World Champion Adam Raga as they come up against a quality field. The challengers will be led by World number three Jeroni Fajardo from Spain and Japan's ex World Champion Takahisa Fujinami, both of whom will be wanting to taste the winner's champagne.

Great Britain will be well represented with four times national title holder James Dabill flying the flag alongside newly crowned British Champion Michael Brown, ex Junior World Champion Jack Challoner and the emerging talent that is Jack Sheppard. This elite group of riders will go head to head in a unique dual lane race format that will ultimately decide the winner of the second edition of the Red Bull City Trial.

Four rounds will be contested from 11.30am through to 4pm in Manchester's busy shopping district in pursuit of the main prize. Each round will consist of four heats, a last chance qualifying eliminator with a twist, two semi-finals and a grand final. With riders accumulating points during the course of the day, the eventual winner will be the competitor who has amassed the highest score come the close of play.

The specially designed course will feature never seen before elements with one of Manchester's famous yellow Metrolink trams taking centre stage in Exchange Square that counts Selfridges and the Arndale Centre amongst its neighbours. The dual lane layout will see the riders charge down the opening sequence of obstacles from their starting point high above the square before taking to the roof of the tram and then heading into the slower section of the course. The competitors will turn around aloft two large footballs before retracing their paths and racing to a spectacular finish.

The World's best riders will be joined by four of Britain's top youth riders, all of whom have already tasted success on the international stage. Billy Bolt, Jack Price, Iwan Roberts and Dan Peace will open the action in each round as they compete in their own separate competition over a modified course.

Speaking ahead of this Saturday's event Lampkin said. "Both in terms of the rider line-up and the proposed course the second edition of the Red Bull City Trial is going to be massive. Racing over the roof of a tram is going to be a first even for me and should be an amazing sight for the public too. I have been training hard over the last few weeks to make sure that I am in good shape as I have no doubt that the competition is going to be as fierce as ever."

"Having the youth riders as part of the event again is a fantastic opportunity for these guys to experience a truly World class event alongside some of the best riders the sport has ever seen. Bringing the sport of trials to such a prestigious location on a Saturday afternoon is just incredible and one that can only be good for everyone involved and will expose trial to so many new people."

Update: Sweden's recently crowned European Champion Eddie Karlsson is on standby and may have to step in for Fujinami who is currently undergoing tests to investigate a knee injury which he sustained in the last few days as a result of a motocross crash that may ultimately rule him out this Saturday's competition.

To lean more about the story behind the trams click here