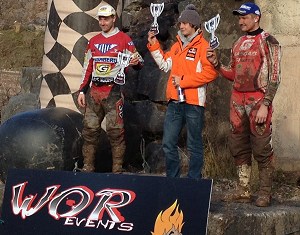 JSTGGUK Rider Alexz Wigg has just had a fantastic podium result at the Tough One little Brother at the best extreme Enduro venue in the UK, the infamous Nantmarr Quarry.

Alexz had only ONE hour of training on the unfamiliar new 2013 EC300 RACING model last Saturday. He threw his leg over the bike again on the start line yesterday and after starting flat last of the ‘popstar class’ he pulled through to 4th after the first lap with GG team mate Jack Lee in 5th behind. The two GG riders flew the GG flag high until Jack was forced to retire with a rare clutch problem. Nevertheless although gutted Jack was seen cheering Wiggy on to grab the final podium place after Paul Bolton’s cruel retirement.

Alexz has finished behind two Professional Extreme specialists (Walker and Jarvis) which makes me think we ‘could’ see a ‘possible’ career change in the future for the talented, strong Wiggster who has become disillusioned with Trials after the recent no-stop rule change.

With the No.1 GG Enduro rider Danny McCanney not being an extreme specialist I think we could see some good results from both Alexz and Jack in the growing sport of Extreme Enduro.

PS. You can check out Wiggy's all-new website by clicking here