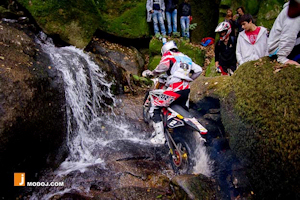 Red Bull athlete Dougie Lampkin - Gas Gas was back at the sharp end of the competition as he placed second at the Extreme XL Paredes enduro in Lagares, Portugal for the second year running. Lampkin had to give best to extreme enduro rider Graham Jarvis on the day, but put in a typically determined performance to secure the runners-up spot against a quality international field.

Dougie soon put the disappointment of his mechanical woes at the recent Sea to Sky event behind him as he qualified in second place in Saturday night's super-final in Lagares to claim a front row start for Sunday's main race. Winner of the event in 2011 Lampkin knew that he would need to be at his very best to keep Jarvis at bay, but had at least given himself every chance by lining up alongside his main rival.

Although Dougie made a good start to Sunday's competition he found himself back in third place as he got to grips with the Portuguese terrain that featured a mixture of wooded areas and rocky sections in the nearby hills. In dry conditions Dougie began his push for victory after the second fuel stop and was soon to overhaul Alfredo Gomez before setting his sights on eventual winner Jarvis.

After three and a half tough hours in the saddle Dougie had to concede the win to Jarvis, despite having kept him within a few minutes reach throughout the closing stages. Rain towards the end of the race did little to dampen Lampkin's spirits as he fought his way up the final climb with the assistance of the local fans, as has now become a part of some of the extreme events.

Speaking about his runners-up placing, ex multi FIM Trial World Champion Dougie said. "As always my aim was to win, but fair play to Graham he rode a strong race and had the beating of me today. He is very much the guy to beat in these kind of events nowadays and has become a real specialist, as opposed to me who has hardly ridden my enduro bike this year."

"As my results have shown Lagares is an event that tends to suit me and is one that I thoroughly enjoy each time I come here to ride it. Overall I am happy with second place, especially after what happened at Sea to Sky, and shows that I can still hold my own even against the younger riders."

"Apart from my bike falling over on the start line and snapping the front brake lever it has pretty much been a drama free day." Dougie ended by saying. "My bike has run well throughout and proved to be a great tool for the job. Now I need to turn my attentions back to my trials bike and use the coming days to be ready for next Saturday's Scott trial, which is going to be another tough event."