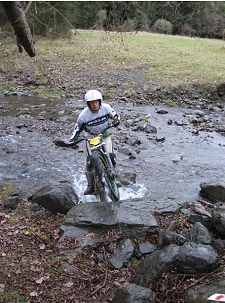 The Pioneer Motor Cycle Club from Christchurch in New Zealand held the countries first ever six day trial between May 29 and June 3. The trial was held near the seaside town of Kaikoura on the south islands east coast.

The club has been holding a three day trial named the “Kaikoura Three Day Trial” there for the past 68 years and this year decided to extend the event to six days, attracting over 50 riders.

The first three days were held over two laps of 20 km and 30 sections on an 1100 hectare (2600 acre) farm with the last three days over a smaller circuit on two other farms. Although it is early winter in New Zealand and the first major southerly storm raced up the island the day before, bringing rain, high winds and snow, the first day of the event brought blue skies and sunshine. And good weather continued for the six days.

Riding the Intermediate Class, Ossa rider and importer, Kevin Pinfold riding his TR280i, won the first day by two points and proceeded to extend his lead during the week to finish in first place on 74 points, with runner up Warwick Merriman 35 points behind on 109.