Successful Week For Sherco At SSDT 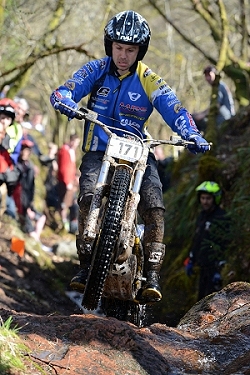 However, from Wednesday onwards Gary stamped his authority having an absolutely stunning ride on his early day on Thursday, to go clean throughout the day. He was caught out at the final time control which had been moved three miles further up the road and incurred a two mark time penalty on what would otherwise have been a faultless day.

Gary really showed his experience by putting what could have been very valuable marks behind him and just getting on with the job in hand. He was very unlucky on Friday on his late day as the rain fell thick and fast and by the time Gary arrived at the later sections it was impossible to see any type of section, never mind a line! His final day score on Saturday moved him up the leader-board to finish in a brilliant third place. It is ten years since Gary has had a podium position and on that occasion he was Sherco bound too and we are absolutely delighted for Gary.

An extra special mention must go to MRS Sherco rider Emma Bristow who created history at the Six Days by taking a Special First Class Award in 47th place. This is an absolutely tremendous achievement and her ride on Tuesday for just seven marks proves there is a lot more to come from Emma next year. There have been some excellent women riders over the years and Emma must be so proud to be the first lady to actually achieve 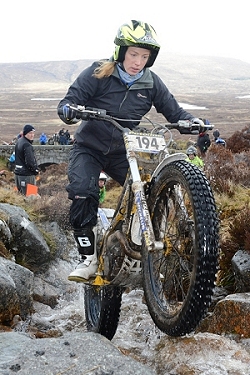 this result. Emma, who is a very determined and dedicated rider went to Scotland with the aim of finishing in the top 50 and everyone at MRS and Sherco are delighted, but in no way surprised, that Emma managed to achieve her objective.

The next MRS team rider home was Richard Sadler who put in some really impressive rides throughout the week with scores of 4, 3, 5, 10 and 12. However his early day on Saturday was a bit of a nightmare, he ended up with a score of 21 on what turned out to be a very tough day, especially for the early riders. However, Richard can be proud of his result as he has proved to himself now what he is capable on next year.

In 16th place was MRS Sherco rider James Fry who again put in some superb results of 3, 1, 8 and 5 but his early day on Friday was a disaster and he added a massive 32 points to his score. He showed his true spirit putting in a fine performance on the last day for 9 marks and again showed what he is capable of achieving in the future.

In 22nd place was the ever popular Yeovil rider Ricky Wiggins who started with a disappointing 14 marks on Monday but then put in some brilliant rides of 8, 5 and 9. His 25 mark score on Friday put him back down the leader-board but he finished his week with 15 marks on Saturday to pull himself back up the results.

In 32nd place was MRS's youngest rider, Luke Walker who had a very steady week, having a very respectable score of 5 on Thursday to show just what he is capable of doing with a little bit more experience. 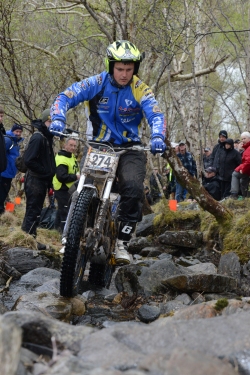 Chris Pearson will have been disappointed with his result in 35th place, having suffered from flu during the week and was very close to retiring on Thursday. Chris managed to continue to the end and despite his lack of form at least he knew there was a reason for it!

Fighting hard not be 'Bristowed' were long time MRS riders Richard Timperley who had a steady week in 37th place and Tom Affleck who finished in 40th place which was truly commendable considering the ankle injury he incurred prior to the trial. Finishing off the Special First Class Awards was Josh Woods in 42nd place and Emma in 47th.

We would like to say a very big thanks to all our team riders this year. It was, without doubt, the most enjoyable week we have spent servicing riders and this was in large part due to the attitude and spirit of our MRS team. Whatever the position they finished in there isn't one single team rider who doesn't give their all to bring in a good result.

Special thanks to Cabestany's mechanic, David, Phil from MRS and Matt from AG Bikes who helped make the Sherco rider's week stress free.

Lastly a big thanks to the organisers, the British Army and, in particular, the observers who stood out in the most horrendous conditions throughout the week. They all deserve a medal but certainly deserve the gratitude of every single rider in the trial.