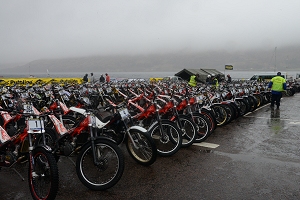 The 2013 Scottish Six Days Trial (SSDT) was declared a huge success with the vast majority of competitors amongst the almost two hundred and seventy strong entry having enjoyed their week in the Highlands. Although the weather was not as kind as it could have been this did not dampen the spirits of the riders who had travelled from as far a field as Japan, America and Australia, and represented over twenty different nations at this unique and historic event.

Returning SSDT champion and former twelve times FIM Trial World Champion, Dougie Lampkin continued his winning association with the Fort William based event as he extended his victory count to a record-increasing seven as he ran out a comfortable winner on this occasion. Lampkin was quick to admit that he will be back next May to defend his SSDT crown as he collected the famous trophy. "It feels good to win again, especially as the SSDT is one of my favourite events each year. Although I am riding less and less competitions now, nothing is going to stop me coming back to try and make it eight wins next year."

Whilst Lampkin's continued participation alongside the large foreign contingent that make the trip to the Scottish Highlands each year serves to reinforce the international importance and status of the SDDT, it was Scotland's very own Gary Macdonald who was stealing the local headlines. His third place finish was an incredible feat for the amateur rider against his full time rivals. "This result is nothing short of amazing for me, so is being able to ride with the likes of Dougie Lampkin, James Dabill and company for one week. The SSDT is the pinnacle of trials, the best and biggest trial on earth and it remains my dream to win it one day."

It was a week of outstanding performances, and this was perfectly underlined by Emma Bristow who for the third year in a row collected the award for the best female competitor at the SSDT. The scale of Emma's victory over her closest female rival was massive and placed her inside the top fifty riders overall, as she became the first ever women in the long history of the event to claim a special first class award. "To win my third women's SSDT by such a margin feels great and this year I am even happier with my result, as I have managed to win my first special first class award by finishing in forty-seventh place overall."

Despite the huge undertaking of running such an event, Clerk of the Course Jeff Horne from the Edinburgh and District Motor Club also managed to enjoy his week. "Obviously a bit more sunshine would have been well received by all, but as we have seen, despite the weather and the extra challenges that brings to both the riders and us as an organising team, we have all managed to finish the week with smiles on our faces. The event has been pretty much without incident, and I would like to thank the riders, the teams, the officials, the landowners, the various authorities and sponsors, plus all of my team for playing their part in the huge success of this year's SSDT. We look forward to welcoming everyone back to the Scottish Highlands again next May." 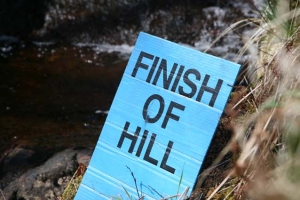 The final word on this year' event went to Paul Bush OBE, Chief Operating Officer for EventScotland. "The 2013 Scottish Six Days Trial was a huge success and the feedback from the riders in particular highlights that Scotland is the perfect stage for events. EventScotland is delighted to have once again supported the event, and I hope visitors throughout the week enjoyed the action on show."

The 2014 Scottish Six Days Trial will take place from its usual Fort William base camp from 5th to 10th May. The entry process for next year's event will begin in late September. Please visit www.ssdt.org for further information.

For almost 2000 photos from the 2013 Scottish Six Days Trial, available as digital downloads or high quality digital prints, head over to TRIALSPHOTOS.COM