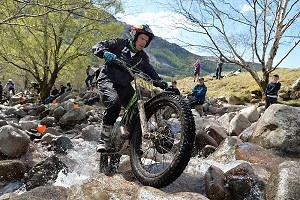 Dougie Lampkin created yet another piece of history as he rode the prototype Vertigo Combat to a commanding and important victory at the 2015 Scottish Six Days Trial (SSDT), as the all new machine made its debut at this ultra tough and World famous event. This marked the ninth SSDT win for the former multi World Champion and sealed an amazing week of success for the Vertigo team in the Scottish Highlands.

Fellow Vertigo factory rider James Dabill also produced an incredible performance as he made it two prototype Vertigo Combats in the top four after the five times British Champion claimed fourth spot at the finish. James dropped to twenty-fifth following unfortunate time penalties on day two, but rode his way brilliantly back up the order over the closing four days to end the almost week long event within touching distance of a podium position.

Unveiled to the World just six short months ago in Milan, everyone looked on with great interest as not one but six prototype versions of the Vertigo Combat were bravely entered into the toughest test of all in the full view of the public and media. The Vertigo team saw the decision to compete at the SSDT with a full line up of bikes as a natural part of the on going development of the Combat as the factory continues to move from a series of prototype machines to a production model later this year.

Five out of the six prototype machines made it to the finish at what is regarded as the toughest test of them all for a modern trial bike, with only Manel Jane failing to make it to the line after he was forced to retire from the competition with a back related problem later in the week. Behind Dougie and James, now team mechanic Gabriel Reyes made a one off return to competing on the international stage and was deservedly rewarded with the best foreign rider award and twenty-ninth place after six long days in the saddle.

Axel Jane ended his week inside the top one hundred and fifty thanks to him producing some of his best ever rides at the Scottish over the six days. Paul Dixon rounded out the order of merit by riding his prototype Vertigo Combat to the finish on a non-award basis after having exceeded his time allowance on day four, when a broken wire connected to the fuel pump caused an intermittent fault.

An obviously delighted Vertigo Sports Team Manager Dougie Lampkin carried a broad smile as he said. "This is an unbelievable moment both for me and Vertigo and is a great reward to each and every person within the team who has worked so very hard over the past months to come to the Scottish with a prototype bike that is capable of winning. It is amazing to think that from the show version that we uncovered in Milan last November that I have now ridden the latest version for six hard days without a single problem to victory in the toughest competition of the year. There can be no bigger statement about the progress we have made over the last six months."

"Me winning is just part of the story, James (Dabill) has done a great job too this week. He could have easily thrown the towel in after Tuesday, but instead he has put in a really professional performance to climb from outside the top twenty to almost be on the podium. Gabriel, Axel, Paul and Manel also deserve a mention too, as it has been a proper team effort this week and everyone has played their part." 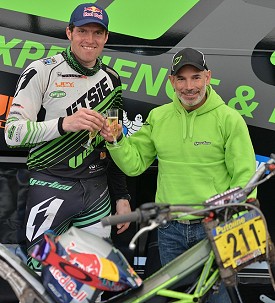 "To win on a new bike at the Scottish is simply unheard of and makes this win perhaps the most special of my nine to date. The bike and team are in a great place, but we still know there is much work to do and although we are going to enjoy and celebrate this moment, we will be back to work on the project next week as we look to make and take the next steps."

Speaking after the event factory Vertigo rider James Dabill explained. "Obviously from a personal point of view I wanted to be challenging Dougie for the win, as a Vertigo 1-2 would have been awesome but Tuesday put an end to that dream. That said it has been an incredible week for the Vertigo team, which I am proud to have been a part of and hopefully I can say I have done my bit by riding my way back up the results to end the week with two Vertigo Combats in the top four."

"I can honestly say it is the best bike I have ridden in Scotland, it felt so planted and stable and was so easy to ride in the sections so I am already looking forward to coming back next year and giving Vertigo their second SSDT win!"