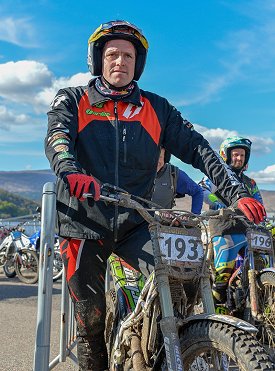 After a nail-biting finish, it was Dougie Lampkin who prevailed in the 2018 ScottishAnother week has passed during which the Scottish Six Days Trial (SSDT) has firmly maintained its place as the jewel in the crown of the international Trial calendar, despite the weather failing to play its part as it did twelve months ago. In fact, the damp and wet conditions added an extra level of adventure as the almost three hundred strong field endeavoured to reach the finish back in Fort William town centre last Saturday afternoon.

A large part of the SSDT retaining its appeal as the greatest Trial in the World is the fact that not only does it continue to be the ultimate test of man and machine, but also it sees amateur riders competing exactly the same sections and course and sharing the week-long experience alongside their professional counterparts. Riding with now twelve-time SSDT winner Dougie Lampkin and runner up James Dabill, plus Scotland's very own podium finisher Gary Macdonald will be etched in the memories of many for the rest of their lives.

In more recent tough economic times the Edinburgh and District Motor Club have shown that they have listened to the feedback from competitors in order to deliver the best possible SSDT year after year irrespective of how cruel or kind the weather maybe. The fact that the entry continues to be vastly oversubscribed each year and that riders from all over the planet still flock to the Scottish Highlands is testament alone that the SSDT lure is as strong as ever.

This year proved to be no exception with the final entry list, for those who were lucky enough to make it through the ballot, being packed with riders from no less than eighteen nations including representatives from Australia, New Zealand, Costa Rica, USA alongside competitors from Holland, Spain, Italy, Czech Republic, Switzerland, Belgium, France, Germany plus a strong contingent from the home nations.

Long before the actual six days of competition, the real work begins with many months of intricate planning plus careful liaison and negotiations with local land owners and authorities to secure land and permissions required to keep the SSDT alive and on track in the modern World. The arrival of a large number of foreign visitors into the Lochaber region just as the start of the holiday season continues to bring important and much needed revenue to the area and huge global exposure to the Outdoor Capital of the UK.

Although it was the riders who gained the huge applause as they stepped up on stage to collect their awards at last Saturday night's closing prize presentation, and rightly so, no SSDT could be complete without a special mention to the hundreds of volunteers, officials and back room staff who make the event happen year in year out. Their support and efforts remain unwavering as they stand out on the hills day after day come rain or shine.

The climax to the 2018 SSDT proved to be a thrilling encounter and saw Dougie Lampkin claim the famous winner's trophy for an historic twelfth time. The Edinburgh and District Motor Club would like to congratulate Dougie, and also runner up James Dabill for an incredible week-long battle and all the other riders who simply made it to the finish.

The club would also like to thank and acknowledge all the competitors, their support teams, the many spectators, the local authorities, their loyal sponsors, the numerous landowners, the teams of volunteers / observers and all the officials who played their part in keeping the SSDT as the jewel in the crown in the international Trial calendar.

Entries for the 2019 SSDT - that will take place from 6th to 11th May inclusive - will open later this year, when riders - amateur or professional - from all over the World are again invited to be part of this unique and historic event.