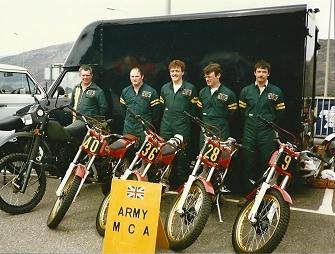 The bug grabbed him and two decades later, in 2007 in his own words while riding up the finishing ramp in the West End car park having just competed his 24th SSDT tired, weary and with severe back pain, could he do this again? Unfortunately not.

Mark continued to support the SSDT when he could and took on the re-fuelling for a couple of years under the guidance of Sandy Mack with the military precision that is implemented each year.

Mark is now involved and helps facilitate Bike Tours for the Wounded (BT4TW) with his friend and founder Darren Clover along with a small team of volunteers.  This charity venture supports all wounded, injured and sick British Service Veterans through motorcycling whether that be a challenge on a US tour or our in-house maintenance and off-road riding courses.

Speaking of the work done by Bike Tours for the Wounded, Mark said ‘’The value of what we do at BT4TW cannot be expressed in words. You really have to be part of it to see the benefit. It is no exaggeration to say that some of the veterans we have supported would not be here today without our intervention and many are in a much better place both physically and mentally’’

It was originally (jokingly!) suggested on this very website that Mark couldn’t stop at 24 SSDT rides, but should go for his 25th SSDT as a fundraiser for BT4TW and in 2020 that passing comment has now become a reality. In arrangement with the SSDT organising committee, Mark will be competing along with BT4TW founder and friend Darren Clover (who will be taking on his first SSDT) in the 2020 Scottish Six Days Trial.

The Army’s involvement in the SSDT is legendary with boss, Sandy Mack, who not only provides the team of willing workers, but the logistics of re-fuelling the Trial is incredible and carried out with the military precision he expects in his workplace to make the event a success each and every year.

In 2020, what better way is there to show not only our appreciation for the Army’s involvement and dedication to the most famous of Trials events, but also the veterans that Bike Tours for the Wounded support than by getting behind this 25:1 Challenge supporting Mark and Darren. 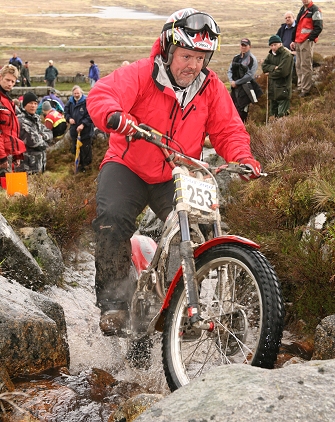 Taking on Chairlift in Mark's last SSDT, back in 2007‘’Our aim is to finish first and foremost but with the passage of time, this has its own challenges. I have also had major back surgery which thankfully was a success, but age, fitness, weight loss and time on the bike still won’t make it easy. Those challenges aside, we are both determined to do all we can to reach the West End car park as 2020 SSDT finishers on Saturday 9th May. The more support we can get, the more it will drive us to succeed’’

Mark and Darren would like to than their supporters to date - TRS Motorcycles UK for providing TRRS Motorcycles and support, Trials UK who will be providing the clothing, Kriega for providing day sacks  and Adventure Bike Warehouse for Kriega Tool Rolls. The intrepid duo are still seeking additional sponsors so if your business can help, please contact Mark on 07799 335534

An online fundraising page has been set up for individuals who wish to support this very worthy cause, which can be reached by clicking here.

More information about the Bike Tours for the Wounded charity and the work they do to support our British veterans can be found on their website at www.bt4tw.co.uk