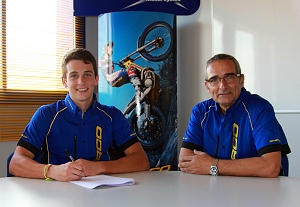 With the intention of broadening and strengthening its trial team for the 2015 season, Sherco has added the 16 year old rider, Miquel Gelabert to its racing structure.

Gelabert has three seasons with Sherco and his a very good track record, he has continued to show progress every year. In 2012 he was proclaimed the Cataluña Champion in the 125 class, the master in 2013 and this past season he has dominated the Spanish Championship, he also made his debut at the international level with excellent results. He had his first podium in the GP of Spain in the world cup category.

The progress that he has shown along with his excellent results has earned him a place on the Sherco Factory Team where he will join, Cabestany, Tarres and Ferrer in what Sherco believes to be an investment in the future.

This also demonstrates that the brand continues to maintain its commitment to the youth in this most demanding and challenging sport.