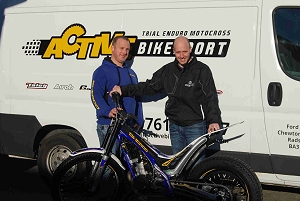 It's very much taking a step back in time with the announcement that as as of now, ex Masters British Champion,  Joe Baker is back on Sherco, riding under the Active Bikesport banner.

Active Bikesport were Sherco's top dealer back in 2003 and Joe actually worked at their shop when they were based in Yeovil.  Unfortunately due to personal problems Active had to close their doors to all the trials fraternity, although they kept in touch with the sport during the intervening years.

They really missed the involvement they had and have now re-opened their shop in Chewton Mendip and acquiring the services of top South West rider Joe Baker is really the icing on the cake for them. Glen and Kevin said, 'As far as we are concerned this is the best thing to happen since re-opening Active Bikesport and being part of MRS and Sherco we are really looking forward to supporting Joe in the South West Championship, selected nationals and hopefully the Scottish Six Days.  Concentrating purely on the Sherco brand Active are pursuing both the trials and enduro markets in the South West but with close links to the M5 they are pretty central for all southern riders.

Joe would like to thank Steve Saunders and all his family for all the help they have given him over the last two years with Jotagas which was very much appreciated but is really looking forward to this new challenge with Sherco and the Active Bikesport crew.

MRS are delighted to have Joe back on board as he is such a great ambassador for the sport and is sure to help Active Bikesport achieve the sales they are looking for in future years.