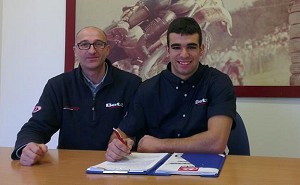 Jorge Casales with Donato Miglio, Beta Team ManagerYoung up and coming Spaniard, Jorge Casales has reached an agreement to ride with the Beta Trial Factory Team for the next two years. After the World Junior title in 2013 and an excellent seventh place in the World Pro class in 2014, Jorge aims to enter the top five in 2015 mounted on the Beta EVO 300. He will also compete in the Spanish Trial Championship with the support of Beta Trueba and in the British Trials Championship with the support of Beta UK.

After a brief visit to the Beta HQ in Rignano sull’Arno to sign the contract, Jorge returned to Spain where he has already started to train on his new bike so he is fully prepared for the 2015 season.