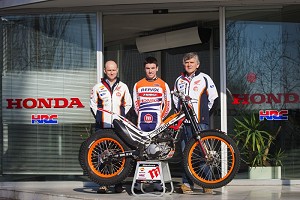 The Repsol Honda Trial Team will get a boost in 2015 with the arrival of Jaime Busto. The young upcoming Spanish rider will line up alongside Toni Bou and Takahisa Fujinami in all events on the 2015 FIM World Championship calendar in Trial Outdoor, as well as taking part in the 2015 Spanish Trial Championship. Busto will compete in all top-level competitions on the Montesa Cota 4RT.

Jaime Busto (Górliz, 4/12/1997) is one of the brightest lights in the Trial discipline. In 2014 he scored an impressive win in the FIM World Cup (former World Junior Championship), winning seven of the thirteen races disputed. In 2012 he had become Youth 125 category champion, a competition in which he had previously debuted in 2011 at thirteen years of age. At a Spanish national level, the Basque rider has clinched just about every possible title in the lower categories, this year even finishing eighth in spite of carrying an injury throughout the latter part of the season.

On his new team and mount for 2015, Busto said "I’m really pleased to be able to form a part of the HRC Team, the best team in the world. For me, it really is an honour to be in a team with such great champions as Toni Bou and Takahisa Fujinami. I hope to be able to learn a lot from them. The Montesa Cota 4RT has surprised me. I will have to get used to the four-stroke, but I think that I’ll adapt to it quickly."

Miquel Cirera, Repsol Honda Trial Team Manager was equally enthusiastic about their new signing "At the Repsol Honda Team we have the best riders in the world, and we want to continue that way for many years, to keep on winning races and titles. We had the chance to sign up Jaime Busto, one of the most promising young talents currently around. He will serve as a fine complement to our champions Toni Bou and Takahisa Fujinami."