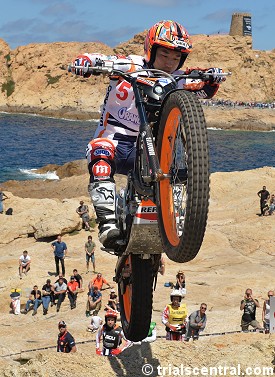 April 14th marked the twentieth anniversary at the top-level of world championship trial for Takahisa Fujinami. After eighteen seasons featuring in the top five overall finishers, the well-loved Japanese Repsol Honda Team rider continues to cut it alongside trial’s elite and now looks forward to starting another season with a curtain-raiser on home soil.

1996 was a year that saw the Olympic Games in Atlanta, Damon Hill clinched the Formula 1 title, Mike Doohan the 500, Max Biaggi the 250 and Haruchika Aoki the 125; the Spice Girls’ first album came out, as did Los del Rio’s global hit “Macarena”. It was also the year Takahisa Fujinami made his world championship trial debut. Now, some twenty years on, the Repsol Honda stalwart remains actively engaged in the highest-level of competition with a track record that takes some beating: eighteen years amid the top five world championship finishers. The 2004 champion is still making history.

– How do you remember your world championship debut in Trial twenty years ago?

– For me Tarrés, Colomer or Lampkin were heroes that I had seen in the magazines and on videos; I’d never actually seen them ride. Jordi was my hero and to be able to compete with him was fascinating. I had been the Japanese champion the previous year, but I was aware that a lot of the technique was still lacking. The first race went terribly, but I learnt a lot and in the second I finished in sixth place and was super-happy. Everything was very positive, I wasn’t afraid and I gave it my all to compete in the world championship. But the first year was really hard. Above all because it was just me and my father and we didn’t have either a mechanic or a minder, while the others had several… and even a personal cook! I felt that if I could make it into the top five, then straight away I could become one of them. 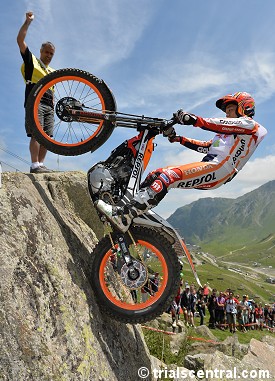 - You joined the team that Marc Colomer was in, who would end up winning the title that year.

– Yeah, I was riding the same prototype bike as Colomer. And the first year I finished the world championship well, in seventh place. Marc won the title and I finished seventh on my debut at sixteen years of age. I was really pleased.

- In spite of being an inexperienced world championship rider at sixteen, you finished the following year in the top group. The improvement was immediate.

– Yes, but it wasn’t easy. In 1999, the year that I finished runner-up, Dougie was always ahead: out of twenty races, he won eighteen of them and there wasn’t a chance of disputing the title. There was a great deal of difference between his level and that of the rest. I only stood a chance of becoming champion in 2003, where I was very competitive. I won more races than he did and the title went to the wire. It was really hard for me because I lost.

- At the end of your second season in the world championship you won your first race. How did you feel in Thalheim?

– It was my second year in the world championship and I was seventeen years old. My minder Shinji Murata, who came from Japan, had a bad accident the day before. They sent him to hospital and I insisted that he go back to Japan to get it checked as he had lost consciousness. I was without help and that day I had Oscar Giró as my minder for the race. We communicated in Spanish, well, a bit basic, but it was as if I was Marc Colomer… It was a shame for Murata, but it was a pleasant surprise to win the race; I was under little pressure but in the end I won it. Runner-up was Kenichi and third was Jordi Tarrés. It took a lot longer for the second victory to come. 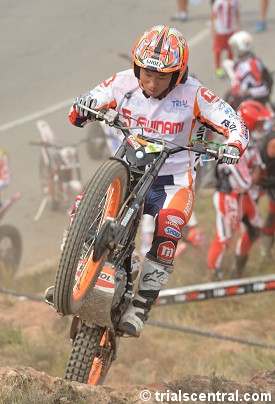 - In 2004 you won the title and in doing so became the first Japanese rider to take the Trial championship. A landmark for you and for Honda.

- You’ve shared the garage with four world champions: Marc Colomer, Dougie Lampkin, Toni Bou and Laia Sanz. What can you say about each of your team-mates?

– Marc Colomer was my first team-mate and we got on really well but I didn’t hit it off with him like I did with Dougie and Toni. With Dougie, away from the races we’d meet up and there were “good vibes” and with Toni too. I’d go so far as to say that he’s more than a friend. I think that I’ve never had a problem with any of my team-mates. Neither with Laia, who is a great friend. She has a high-level and it’s amazing what she has achieved.

– The fact that the world championship begins at home means one thing: maximum pressure. But it also means that I have a bit of an advantage because the Japanese crowd gets behind me and pushes me on to victory. It’s going to be very important to have a good race and fight to win. There will be a lot of pressure, but at the same time, performing in front of the home crowd is a big motivation. In Japan I’ve always had great results. And we know what the sections will be like: demanding and very hard, but that’s what is suited to the ‘Fujigas’ style. 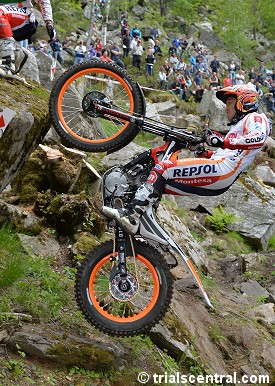 – How did you get the ‘Fujigas’ nickname?

– It was in my first year and first race in Madrid. There was a really difficult section with an enormous wall that no-one could get over. I gave it full throttle and got over it. A spectator asked me what my name was and I said ‘Fujinami’, and he told me that it wasn’t and that it was ‘Fuji-Gas’. I loved it and straight away adopted it as a nickname.

- What will you remember the most about the world championship?

– Several races, but one in particular, in the United States. It rained so much and the time was really tight. The sections were totally flooded and the engine got soaked. I had to stop, dismantle the bike and get the water out. I continued, did well and won a really tough race. Normally, in the United States I’ve always done well. In Japan too. Two years ago in Motegi, I was tied with Fajardo until the final hazard. I heard over the P.A. system that I had the chance to win and the crowd began to get behind me. It was incredible.

- Best of luck to you for your twentieth season!

And what the others say...

Toni Bou: "For me ‘Fuji’ has been an idol. I’ve admired him ever since I was little. I watched him when he was proclaimed champion and I’ve always seen him as a great fighter with a great style. I think that all riders must learn from him and can learn from his consistent willingness to battle.

His career hasn’t been an easy one, but I’m convinced that he will continue to fight in each race just as much as he did when he started twenty years ago. I’ve been lucky enough to see him, compete with him and now to be a good friend of his. ‘Fuji’ has helped me a lot in a lot of races. Although our relationship was never immediate or easy, little by little we have become great friends and we have a real laugh together. He’s not a typical Japanese guy. The races and the trips have helped a lot. There will always be a great friendship between us and great memories which have meant that we’ve had a few nights unable to sleep for laughing so much"

Dougie Lampkin: "So my great friend and long time rival has reached 20 years of World Trials Championship…..WOW! I remember when he arrived in Europe I didn’t think he would be much of a problem to my world championship. He was wild and out of control, but over time he learned, watched and trained harder than anyone else. After being placed second for so long, he took a well-deserved World Trial Championship in 2003. I was happy that when my reign of titles was finally taken, it was by him, as on my last time as champion in 2003, which was decided at the last round, I went to see him after the race, he was a broken man and crying. That’s how much it hurt him to lose. In 2004 he was on a mission and his dream came true: World champion.

We were team-mates from 2000 - 2006 and in those six years we spent a lot of time training and travelling. He was great fun and we had plenty of great times and experiences to remember.

I rode with Fuji for around fifteen years and we had almost no problems and on the few occasions we did they were soon a closed subject and we were friends again. He’s still pushing so hard in training and in competition which shows how determined, strong, dedicated and professional he is and that why he has fans all over the world. Mr Takahisa Fujinami - Legend"

Marc Colomer: "It was such a long time ago when I had my first world championship trial alongside Fujinami that I can’t even remember! But I do remember that the year that he arrived was in 1996, the year that I won the world title with Montesa. He spent the whole year saying – I don’t know if it was to motivate me or not – that he would win the world title.

In the beginning he had a very particular way of riding: with a lot of throttle. I realized right away that he was getting used to the world championship and the European style very quickly. Kuroyama was ahead, but he was very young, with a way of riding that was very aggressive and went really well for him. That was how the ‘Fujigas’ name came about.

Although we were in the same team we didn’t have a close relationship. But he has always been very wrapped up in this sport and involved with the culture around here. I was surprised at how well he adapted to Catalonia. I should point out too how hard he trained. He trained much harder than we did. He had an enormous capacity for enduring pain and training hard."

Laia Sanz: "The only thing that I can say about ‘Fuji’ is that he’s the best of friends. When I first joined the team he was a bit shyer, which was a bit imposing, but he opened up a lot with time and also, when he won the title for the first time and became a father, he became much friendlier.

As an athlete, he is really demanding and hard-working with an incredible capacity for enduring pain. I’ve seen him suffering many times, with injuries, but he has been able to overcome them. He’s also great fun and is a real laugh, and someone who I admire very much. Maybe he hasn’t got the gift that someone like Bou or Cabestany has, but he’s been up there in the battle with them for years. The fact that he’s been at the top for twenty years says it all. He has outlived different generations of riders, styles and rules. And he’s still here. I’m lucky enough to have one of his helmets signed by him that I keep in the front room of my house. Congratulations Fuji!