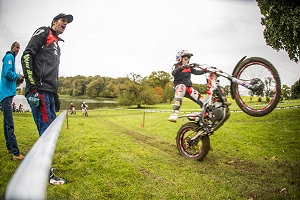 Just over one year on from when Red Bull athlete Dougie Lampkin made history by becoming the first ever person to wheelie the entire 37.3 miles of the iconic and much revered Isle of Man TT course, the first anniversary of this incredible achievement was marked by a day of celebrations.

Saturday morning saw fifteen invited youth riders from Dougie's native Yorkshire take part in a skills based training session over looking the lake at the wonderful setting provided by the Conistion Hotel just outside the market town of Skipton. The talented group of youngsters aged from nine years old to fifteen years old were put through their paces under the watchful eye of twelve times FIM Trial World Champion Lampkin, with each of the three skill stations designed to develop their balance, control and ability to produce the perfect wheelie.

After a hearty barbeque lunch the young riders were then tasked with putting their morning of learning into practice as they competed in the anniversary challenge event proper over the same three skill stations that were judged for both performance and flamboyance. Showing his skill and style, the second youngest competitor, George Hemingway surfaced as the early leader but was later deposed from an almost certain podium place as the other boys and girls upped their game.

George's older brother Harry Hemingway, aged just eleven, emerged as the deserved victor and was joined on the podium by Martyn Pratt in second and Olivia Brooksbank in third spot who flew the flag high all day for the female challengers. With the trophies handed over to the top three riders and certificates to all those who took part, the focus then switched to the evening event.

Around fifty invited guests joined Dougie for a private dinner inside the hotel, which included a special anniversary screening of the highly applauded Red Bull Media House documentary "Dougie Lampkin - The Wheelieman" (this can still be viewed on Red Bull TV - click here to watch it) followed by a very personal Q+A session hosted by Caroline De Moraes. The evening was brought to a close by another short film that highlighted never seen before behind the scenes outtakes that failed to make the final cut.

Speaking about the anniversary celebrations Dougie said. "Normally I am not a man to dwell on my past successes, but in the case of the wheelie I suppose it is a huge achievement that shouldn't be forgotten too easily. Having the kids here this morning and teaching them the skills needed to do just a relatively short wheelie reminded me just how tough a challenge it actually was to keep the front wheel up for thirty-seven miles. The young riders did brilliantly and should be proud of what they achieved today, especially those that grabbed the top three trophies."

Lampkin ended by adding. "Bringing everyone who was involved in this special project back together for dinner this evening has been the perfect way to celebrate and mark the first anniversary, like the wheelie itself none of today would have been possible without the kind and continued support of Red Bull, so a big thanks to goes out to them once again."