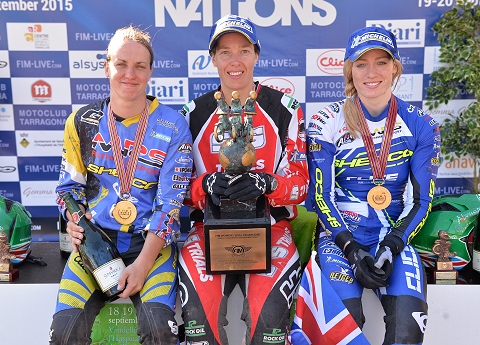 Defending champions Great Britain recorded a third victory in a row at the FIM Women’s Trial des Nations held in L'Hospitalet de l’Infant, Spain. The British trio was led by 2015 FIM Women’s Trial World Champion Emma Bristow – Sherco who was joined by Rebekah Cook – Jgas and Donna Fox – Sherco as they ran out eventual winners by twenty marks, but only after having been pushed hard by eventual runners up Germany. The German line up of Theresa Bauml – Ossa, Mona Pekarek – Sherco and Ina Wilde – Gas Gas trailed Great Britain by just a single mark on the first lap, but saw their challenge fade during the latter stages.

Perhaps feeling the pressure, the German women faltered on their second visit to the fifteen sections and in the end just managed to hold on to second spot as both Spain and France closed in on them. The battle for the last remaining podium place was a fierce and tight affair with the Spanish squad of Mireia Conde – Beta, Berta Abellan – Sherco and Elisabet Solera – Gas Gas finally snatching third position by a single mark from their French rivals after thirty sections in total had been ridden by all nine nations who took part in today’s team competition.

With the best two scores from the three riders in each hazard being used to calculate the final team totals, France’s team of Marilyne Journet – Beta, Sandrine Juffett – Jgas and Pauline Masanes – Gas Gas did little wrong with two consistent laps and can count themselves slightly unlucky not to have made it on to the podium. Norway’s line up of Mette Fidje – Sherco, Ingveig Hakonsen – Beta and Julie Sandanger – Beta showed moments of great promise, but come the finish had to settle for rounding out the top five.

Italy’s Martina Balducchi – Scorpa, Elisa Peretti – Gas Gas and Sara Trentini – Sherco recorded laps scores of thirty four and thirty seven marks respectively to complete the Trial with a total of seventy one marks. This was some way back from Norway, but still gave them sixth place and put them well clear of the USA. America, who ended the day in seventh, was represented by Caroline Allen – Scorpa, Rachel Hassler – Scorpa and Madeleine Hoover – Gas Gas. Reversing the role of best overseas team, USA this time out got the advantage over Australia’s girls who placed eighth. The squad from down under saw their efforts hampered as Ina Halls – Beta did her best to deal with the effects of a severe chest infection although she never gave up alongside her team mates Kristie McKinnon – Gas Gas and Kaitlyn Cummins – Sherco. Ireland’s brave duo of Kate Callaghan – Beta and Michelle Hanlon – Gas Gas fought their way round every inch of the rocky course to record a proud finish and round out the classifications in ninth place.

Speaking on behalf of Great Britain, Bristow said. “It feels great to win again, but we gave ourselves an uphill fight after we didn’t ride so well on the first lap. We knew that Germany were close, but we never panicked or really felt the pressure. We simply got on with our riding and produced a much better second lap that gave us a clear win come the end of the Trial. We were always confident that we could win again, especially after we secured the top three places in the individual FIM Women’s Trial World Championship yesterday. All in all it has been a great year for the British Women, so I hope this will help to inspire the girls back in the UK to continue this kind of success in the future.”

Tomorrow will see the men in action as the 2015 FIM Trials des Nations is set to bring to a close three days of competition in the Spanish seaside resort of L'Hospitalet de l’Infant.