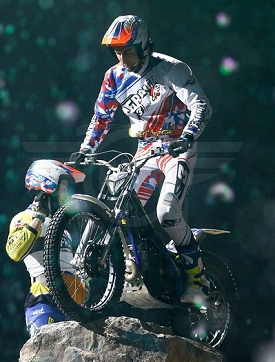 The contest will be between five two-man teams which comprise of the unbeaten nine time winners Spain, plus constant challengers Great Britain, France, Italy and welcome newcomers the USA.

Each country, as in the previous two editions of the contest, will field a two-man team although the FIM have implemented an important and interesting rule change this year in that one team member must be under twenty-five years of age.

The Spanish team will comprise of Bou and Jaime Busto, Britain will send James Dabill and Welsh Champion Iwan Roberts, the home team France will rely on Alexandre Ferrer and Benoit Bincaz, whilst Italy propose Matteo Grattarola and Gianluca Tournour leaving the relatively unknown quantity - especially indoors – who are Team USA in the form of Bryan Roper and Andrew Putt.

Spain start as perahps favourites to ride to title number ten despite the introduction of the younger riders. Bou stands supreme while eighteen year old Busto has a superb record outdoors, being the winner of the 2014 FIM Junior Trial World Cup and finishing a fine sixth in his first year in the World Pro class of the FIM Trial World Championship last season. Busto has also competed twice in the 2016 FIM X-Trial World Championship, in Barcelona and last weekend in Marseille so has important indoor experience.

Great Britain’s experience comes from twenty-nine year old James Dabill who is partnered this year by the tall and talented nineteen year old Iwan Roberts, who finished third in the FIM Junior World Trial Cup and won the final round of the British Trials Championship in 2015.

Alexandre Ferrer and Benoit Bincaz carry the home fans’ hopes. Ferrer has been disappointing in this year’s X-Trial series, but here is his chance to shine along with Bincaz who was victorious on four days the FIM Junior Trial World Cup last year.

Twenty-eight year old Italian Matteo Grattarola and younger team mate Gianluca Tournour are probably the least favoured of the European teams while twenty-two year old American Roper and his teenage compatriot Putt bring some welcome overseas flavour to the competition with the absence of a Japanese squad this year.

A speed section, rather than the more usual dual lane race, will get the trial underway and decide the running order before the teamwork kicks in as the Nations’ team managers will choose which of his riders tackles which three of the six sections. On the second lap the riders are not allowed to compete on the sections they have already ridden to ensure a truly fair contest. All in all everything is in place for another hotly contested FIM X-Trial des Nations to be played out in Nice for the third time in a row.