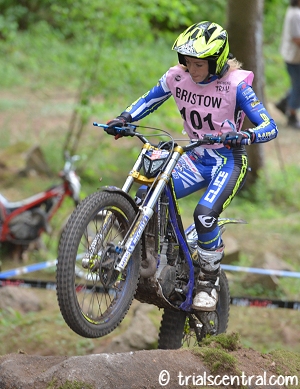 Reigning Champion, Emma Bristow will be out to defend her title in Spain...The town of Teo in the north-west corner of Spain will welcome round two of the 2015 FIM Women’s Trial World Championship this weekend, with two days of hotly contested female action in prospect. Reigning champion Emma Bristow – Sherco will lead the charge as the girls re-gather after their extended mid-term break, with the British rider currently holding a narrow two point lead over her compatriot Rebekah Cook – Jgas in the general standings following the initial double header held in the Czech Republic back in late May.

Whilst it is 2014 FIM Women’s Trial World Champion Bristow who has the slim advantage heading to Spain, it was actually her long-standing and arch-rival Cook who took first blood. The British pairing embarked on a fierce and day long battle in Sokolov during Saturday’s Trial, in conditions not too dissimilar to their native land, with the lead switching several times over the three laps of twelve wet and slippery hazards set in the wooded areas close to the road that led from the lakeside paddock facility.

Cook was the leader on lap one by two marks from Bristow, but a lap later it was Emma who had her nose back in front by just a single mark as the pair headed out into the forest for one last time. Rebekah held her composure brilliantly despite the immense pressure associated with the situation to produce the best lap of the Trial and in doing so took an important victory on day one by an eventual six marks over her main championship rival Bristow.

Fuelled by the bitter taste of defeat Emma responded like a true champion twenty-four hours later as she delivered a master class with three lap scores all in single digits. The best of these was a single dab ride through the opening twelve sections that effectively destroyed her opposition and left them fighting amongst themselves for the lower order. Bristow ended the day some seventeen marks clear of eventual runner-up Ina Wilde – Gas Gas, as the tall German rider recorded her best ever GP result and in doing so demoted Cook to third on day two a further five marks back.

With Bristow and Cook holding the top two spots in the current general standings, Spain’s Sandra Gomez – Scorpa is next in the packing order as she heads into the first of two home events in less than seven days. Gomez went 3-4 in the Czech Republic and will need to improve her 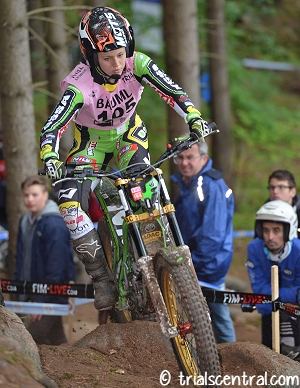 ...whilst Germany's rising star, Theresa Bauml can challenge when on formform if she is to emerge as a real title challenger to the British duo. Wilde who placed seventh then second respectively in the Czech Republic is presently fourth in the championship table just two points behind Gomez.

Making it three British riders in the current top five of the general standings Donna Fox – Sherco made a solid return to the series after an extended absence and earned two top five placings for her efforts, fourth on Saturday followed by fifth on Sunday. Seventeen-year-old Theresa Bauml – Ossa sits in sixth spot overall after the first round, but will probably not be happy with her first weekend showing of 5-6 having made it on to the podium at the closing event of the 2014 season. The young German rider remains a real threat to the more established Women as she continues to make her mark on the series with her neat and technical style of riding.

Spain’s fifteen-year-old Berta Abellan – Sherco, her elder compatriot Mireia Conde – Beta and fellow countrywoman Elisabet Solera – Ossa at present occupy seventh, eighth and ninth respectively in the title race, with Italy’s seasoned campaigner Sara Trentini – Sherco rounding out the interim top ten ahead of this weekend’s two day encounter in Teo, Spain. As per previous editions the 2015 FIM Women’s Trial World Championship will be determined from the best three results from the five counting days in total and therefore the title could be decided come this Sunday afternoon, subject to how the results play out.