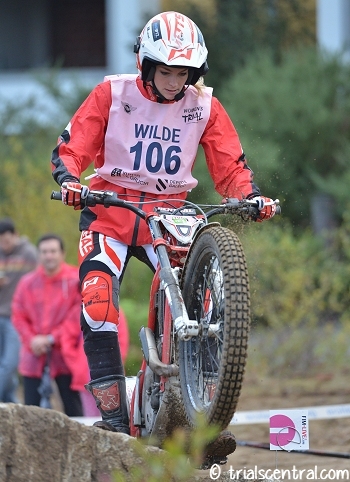 This Friday will see the concluding event of the 2015 FIM Women’s Trial World Championship that will be hosted in Tarragona, Spain. Twenty-five-year-old Ina Wilde – Gas Gas from Germany will be amongst the female competitors who will come together for the final battle of the current season. Wilde presently holds fourth in the general standings with the tall German rider enjoying her best ever campaign thus far. Another solid result at the second Spanish round in less than seven days will see Wilde improve on her previously highest sixth place ranking that she achieved just last year.

Up until 2014 Ina was always on the cusp of making her presence felt amidst the more recognised names of the FIM Women’s Trial World Championship, although she had previously fell short of making that step up despite her undoubted skill and determination. Wilde first arrived as part of the female series back in 2007, making her debut with a fourteenth place at that initial event in the Czech Republic aged just seventeen-years-old.

Sixteenth in the general standings come the end of her opening campaign the then teenage German rider really upped her game the following season when she finished inside the top ten in eighth position much thanks to her fifth place at the final event in Andorra. Unfortunately Ina was unable to continue her rapid progress in 2009 and dropped to ninth in the overall rankings twelve months later.

Three consistent results across the rounds in France, the Czech Republic and Poland that made up the 2010 FIM Women’s Trial World Championship saw Wilde back on track as she achieved her best overall placing to date by finishing this particular campaign in seventh spot. However the yoyo pattern that had framed her career thus far was to return in 2011 as the young German rider fell a place to eighth come the final rankings. 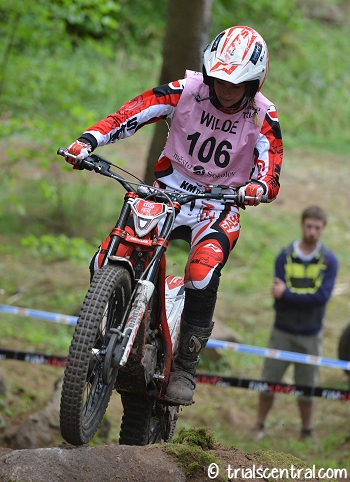 Worse was to come the following season as Ina missed the opening round in Andorra due to her studies and then only managed to score points on one of the two days of competition in Tramelan, Switzerland where the second round was hosted and was then well below her best at the final counting Trial at Moutier, Switzerland much due to the slippery conditions. This series of events saw Wilde plummet to fifteenth in the general standings.

2013 saw a similar story with the four times national German champion again absent from the initial encounter in Andorra as her education took priority, before she then scored a morale boosting fifth place at the first of three counting days held in France that year. Ina’s closing pair of results on French soil was far from impressive and left her just outside the top ten overall, as she placed eleventh in the final general standings.

Thankfully last season saw a return of form for the towering German figure as she finally put into place the promise she had showed during the early part of her career. Two fourth positions, one in Spain and one at the final round in Andorra topped an excellent campaign during which she dropped a seventh place at the end of the year with that being her worst result of the series. Her remaining three highest point scoring finishes put her in sixth spot in the 2014 rankings to make it her best season to date.

That was before this campaign, when Wilde has kicked on, starting off with a career best runners-up placing at the opening round in the Czech Republic and a 3 – 7 showing in Spain last weekend to go into this Friday’s finale of the 2015 FIM Women’s Trial World Championship set to make it her best season yet.