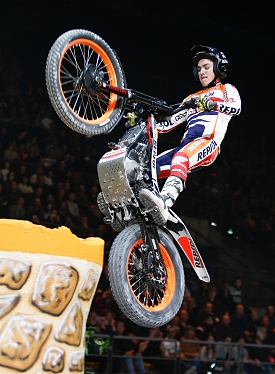 Image: FIM/Good ShootJaime Busto – Repsol Honda, the highly-talented teenage Spaniard will be the wild card rider at round three of the 2017 FIM X-Trial World Championship in Marseille, France this coming Saturday. At nineteen years of age Jaime will be the youngest rider in action, but he is already experienced at this level having competed twice as a wild card in 2015 and again in 2016.

He also had a wild card ride at the opening round of this year’s series in Barcelona where he posted a career-best fifth, only missing the cut for the final by two marks. It was a strong performance that sent out a powerful signal to his rivals that he has the skills to challenge the established top four.

“Marseille will be my second participation in the 2017 FIM X-Trial World Championship after the competition in Barcelona where I think that I rode well in a very demanding event,” said Jaime. “As a wild card entry I don’t think I have to have any particular objective other than not making any mistakes that could cause injury.”

From Bilbao in Northern Spain, Jaime was the FIM European Youth Champion in 2012 and followed this achievement up two years later by winning the FIM Junior Trial World Cup.

In 2015 he made his debut in the FIM Trial World Championship where he finished sixth overall with his best results being fourth places on day one in the Czech Republic and on both days in Portugal. Last year he again finished sixth, but this time he improved to seven fourth place finishes and could have climbed to fifth in the championship table if it was not for a disappointing result on day one in France.

“What I would like from Marseille, as the organisation has placed its trust in me, is to get a good result and make it into the final,” added Jaime. “It won’t be easy as my rivals have a lot more experience than I do but I will try – like I did in Barcelona – to not get nervous which has been a handicap to me on the other occasions that I’ve been able to compete in the FIM X-Trial World Championship events.”