Toni Bou Aiming for Three In a Row 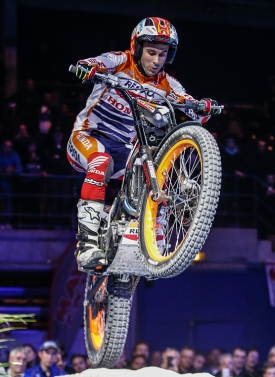 Image: FIM/Good ShootDefending champion Toni Bou - Repsol Honda continues his defence of the FIM X-Trial World Championship at round three of the 2017 series in Marseille, France this coming Saturday. The Spanish superstar is unbeaten so far this year with victories in Barcelona, Spain and Wiener Neustadt, Austria and starts as a strong favourite to make it a hat-trick of wins in the Palais des Sports.

Once again his closest competition is likely to come from fellow Spaniards Adam Raga – TRS, Jeroni Fajardo – Vertigo and Albert Cabestany – Sherco. Along with Bou this trio have made up the top four at the opening two rounds, but they will have to raise their game if they are going to stop the reigning champion taking another step towards an unprecedented eleventh title in eleven years.

Since 2002 Marseille has featured in the FIM Indoor / X-Trial World Championship calendar every year apart from 2013 and Bou has won on the last five occasions the series has visited the historic Mediterranean city.

Raga’s two second places put him second in the title chase, but at the halfway stage he is already ten points behind Bou. Cabestany, the 2002 champion and the last rider to beat Bou in Marseille back in 2010, is tied on points with Fajardo, but holds third by virtue of his better result in Wiener Neustadt where he took the final step on the podium just one mark behind Raga.

The eight-man field for Marseille is completed by Spanish wild card rider Jaime Busto – Repsol Honda, aged nineteen, who finished fifth in the opening round of this year’s FIM X-Trial World Championship in Barcelona, missing the cut for the final by two marks.

From Marseille the 2017 FIM X-Trial World Championship stays in France, signing off with the final round in Nice on 31st March.