Three In A Row For Toni Bou In Marseille 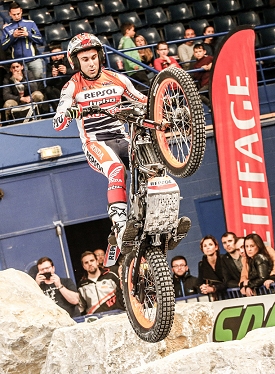 Toni Bou – Repsol Honda survived a stalled engine in the last section of the night in Marseille, France to secure his third win in a row in the 2017 FIM X-Trial World Championship and in doing closed in on an eleventh successive title with just one round remaining. Typically, Adam Raga – TRS kept Bou true and finished only a single mark behind the defending champion and as runner up after Toni fived the final hazard. Albert Cabestany – Sherco fought off Jaime Busto – Repsol Honda for the last podium placing as the teenager claimed his maiden top four spot in the series.

With just five sections squeezed onto the small arena floor, there was never going to be much margin for error in qualification for any of the eight riders if they were going to transfer to the final. Wild card entrant Jaime Busto - Repsol Honda out-paced Franz Kadlec - Gas Gas in their head-to-head duel to force the young German rider to ride first in the initial pairing. Again Kadlec put up a brave performance, but was to end his night with little reward for his efforts as he placed eighth on a score of twenty-one marks. In contrast Busto produced his best ride to date and booked his place in the main event, for the first time in his career, with a total of twelve marks.

The sheer speed of the dual lane race suited Takahisa Fujinami - Respol Honda perfectly as he easily beat James Dabill - Gas Gas to the line in their side-by-side encounter. Dabill was never to recover from this early set back and suffered three fives on the bounce midway through qualification to rule himself out of contention as he finished in a below par seventh spot. Fujinami faired a little better and had to rely on a tie-break race to finally secure fifth position after what was a torrid night for the experienced campaigner.

Well defeated in his sprint against Cabestany, Jeroni Fajardo - Vertigo looked far from his best as he made heavy work of the technical hazards with a trio of failures in the first four sections. Fajardo would eventually be demoted to sixth place as he lost out to Fujinami in the tie-break as they both notched up a total of sixteen marks.

As has become the pattern this season, the last pairing of Bou and Raga served up the best drama of qualification as Raga got the better of the defending champion in their race before then topping the initial rankings with a stand out lap of just two marks. Bou’s uncharacteristic five in the fourth hazard as he slipped back off the awkward concrete double step would leave him down in third spot at the end of qualification and trailing Raga and Cabestany respectively.

Despite his qualification placing Bou soon rode himself back into command as he came out on top of the races that decided the running order for the final. Although forced to ride first, Busto acquitted himself well in his first ever main event and was unlucky not secure a podium position. Cabestany needed a clean in the last section to secure third spot, whilst it looked like the top two places were already decided as Toni rode himself clear of his rivals with an emphatic clean in the second hazard, this time ridden in the reverse direction as with the other four sections. Thankfully this gave Bou a sufficient-enough gap to win despite him stalling his engine in the closing section of the event.

The final round of the 2017 FIM X-Trial World Championship will play out next Friday evening further along the southern French coastline in the affluent city of Nice. Here, Bou who now holds a fifteen-point lead in the general standings, will be the odds on favourite to seal an unbelievable eleventh indoor title in a row.