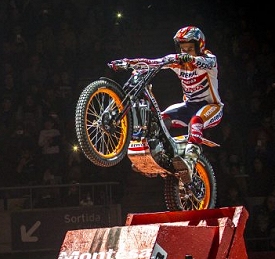 The Palais Nikkaïa in Nice, France, will host the closing round of the FIM X-Trial World Championship this Friday, with Repsol Honda Team’s Toni Bou poised to boost his already legendary status with an eleventh indoor title.

The final day of March looks set to be chronicled in the sport’s history books with yet another entry for Toni Bou in an already lengthy list of honours. The Repsol Honda Team ace will dispute the fourth and final round of the FIM X-Trial and looks likely to seize an eleventh consecutive indoor title.

The last X-Trial outing this season will be battled out in Nice, France, where trial’s elite get to lock horns for the final time to decide the outcome of the 2017 campaign. Toni Bou and Takahisa Fujinami line up for Repsol Honda Team in what is expected to be a final as closely fought as the previous three events in Barcelona, Wiener Neustadt and Marseille, where a triumphant Toni Bou ruled the roost in each round.

To clinch the title Toni Bou will need five points – something expected to happen around ten o’clock in the evening. Making the cut for the final round will mathematically seal the championship title for the Repsol Honda Team rider.

Bou will have little time to prepare the event but can rely on the stamina acquired during a rigorous fitness programme started at the end of last season. The rider will be keen to pay close attention to the mechanical aspects of the Montesa Cota 4RT to maintain his decade-long domination in the discipline.

The world title remains the clear objective of Toni Bou who will be eager to round off the championship with a victory on the day too. Takahisa Fujinami’s mission will be a place on the rostrum that has remained elusive so far this season. Sharing the podium alongside his team-mate would be the perfect way to wrap up the indoor season.