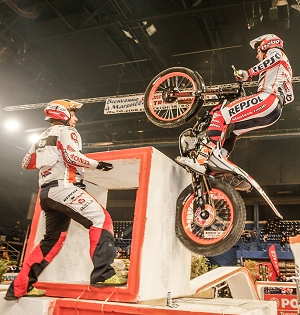 Image: FIM/Good ShootToni Bou - Respol Honda heads to Nice, France for the fourth and final round of the 2017 FIM X-Trial World Championship this coming Friday on the verge of claiming an incredible eleventh consecutive indoor title. The Spaniard is unbeaten so far this season and added to his victories in Barcelona, Spain and Wiener Neustadt, Austria last Saturday night in Marseille, France. He goes into the championship finale with a fifteen-point lead over four-time champion Adam Raga – TRS.

On paper Bou looks to have the title sewn-up for another year and even if Raga wins on Friday night Toni only needs to finish in fifth place in Nice to continue his record-breaking run. The last time he finished lower than this was in 2007 when he was sixth in Marseille so Raga, the only rider with a mathematical chance of beating him, has just the slimmest of chances of regaining the title he last won back in 2006.

Raga pushed Bou hard in Marseille, finishing one mark behind after the defending champion picked up a five in the last section of the final when he stalled his engine. Albert Cabestany -Sherco was third on the night to strengthen his hold on third in the championship with Jaime Busto –- Repsol Honda claiming his first-ever top-four finish in the FIM X-Trial World Championship.

Despite failing to make the final in Marseille for the first time this season, Jeroni Fajardo - Vertigo, who finished sixth behind veteran Japanese rider Takahisa Fujinami – Repsol Honda, still holds a comfortable fourth in the championship.

After two wild card rides Busto currently sits fifth in the points table but the Spanish teenager is without a start in Nice so he will lose this position to Fujinami.

Currently seventh in the championship standings, British rider James Dabill – Gas Gas will also be hoping to climb the leader board along with Germany’s Franz Kadlec – Gas Gas who is the last of the permanent championship riders in eighth having failed to make a real impact on his more experienced rivals this year despite some promising performances.

Wild card rider for the final round is three-time French champion Alexandre Ferrer – Sherco who will be making his twentieth X-Trial appearance.