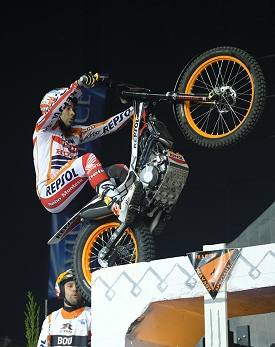 Toni Bou - Repsol Honda sealed his eleventh straight FIM Indoor / X-Trial World Championship with an emphatic victory at the closing round of the 2017 series in Nice, France. Bou was faultless in the final to sign off on another 100% winning season.  Adam Raga - TRS pushed Bou hard all night, but had to settle for second and the runners up spot in the championship. Jeroni Fajardo - Vertigo survived a last-minute tie-decider against James Dabill - Gas Gas to claim third on the night and to steal the last podium place in the overall standings away from Albert Cabestany - Sherco.

A jubilant Bou said. “This was the perfect moment for me, it could not have been any better tonight. To find my best riding at this important event and to be clean in the final is a great way to take the championship. I felt much pressure in qualification, as it was quite easy, but I was still able to ride well. I am very happy not only for myself but also for my whole team.”

With home wildcard rider Alexandre Ferrer - Sherco in the initial qualification pairing alongside Franz Kadlec - Gas Gas a noisy start to the evening was always guaranteed. The audience responded loudly as Ferrer beat Kadlec in the speed section to earn the right to ride behind the German through the six qualification sections. Ferrer was to eventually triumph over his young rival with a tally of fourteen marks compared Franz’s loss of seventeen to earn sixth and eighth positions respectively.

Takahisa Fujinami - Repsol Honda brought more volume from the capacity crowd as he went faster than Dabill in their start order decider. However, James was to have the last laugh as he conquered the steep wooden timber pack in the second hazard to book his place in the final on a total of nine marks. Fujinami ended his evening on a score of eleven and claimed fifth spot for his typically flamboyant performance.

The first all-Spanish pairing of the night saw Fajardo out sprint his compatriot Cabestany over the speed section. This proved to be beginning of a bad outing for Albert as he notched up three fives, including losing his front wheel on the logs in section five, which would put him down in seventh place and eventually was to cost him third spot in the final standings. Fajardo was calculated in his approach and booked his place in the main event on a total of just six marks.

Bou just edged Raga in their initial speed encounter to seize an early advantage, but was unable to shake off the attentions of his career long closest challenger as they both arrived at the last qualification hazard unpenalised. With neither able to climb the large step at the summit of the scaffold mountain and with them locked on five marks apiece a second speed section was needed to split these fierce rivals. Raga was the victor this time around by a fraction of a second, to snatch top spot in qualification away from Bou.

Raga carried his slight advantage through to the start of the final as he was fastest in the four-way speed race to deserve his last place in the riding order, with this time all the sections being ridden in the reverse direction with the exception of the sixth hazard that had defeated all in qualification and remain as was. Fajardo and Dabill were always going be fighting for the remaining podium place, and after being tied on thirteen marks each, it was Fajardo who succeeded in the speed section decider to snatch third spot on the night and dramatically in the championship. Bou was simply sublime in the final, not losing a single mark against the six lost by Raga. Toni could not have claimed his eleventh indoor title in a better way and remains the undisputed King of X-Trial.

With the individual title now decided, the attention now turns to the team prize as the various invited countries are set to fight it out at the FIM X-Trial des Nations in Pau, France next Friday evening.