Can Spain Be Beaten At X-Trial des Nations? 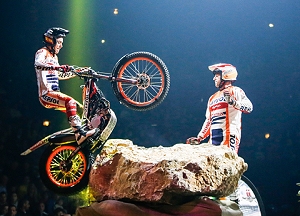 Since the event was first held in 2002 Spain have remained unbeaten and it is a fact not lost upon nineteen-year-old Busto.

“I think there is a certain pressure on my head,” he said, “because the Spanish team has been winning for many years and when you compete you never want to break that streak. In other words, we must do well.

“But having Toni as my team-mate means I hope it will be easy to win. I look forward to doing well and I am very excited to be able to compete to win again the FIM X-Trial des Nations. The level of this competition is usually a bit lower than the World Championship sections so I hope I can also prove my level.”

A new ruling introduced in 2016 that one team member must be under twenty-five years old explains why Busto has been selected in favour of more accomplished Spanish riders for the second consecutive year.

Of the ten competitors only Bou, Dabill and Kadlec competed in all four rounds of the 2017 FIM X-Trial World Championship with Busto and Ferrer both making wild card appearances, Busto in particular impressing with his fourth-placed finish at round three in Marseille.