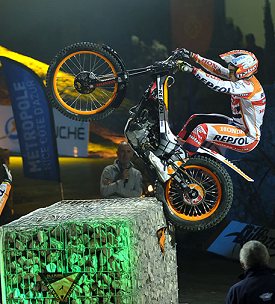 The FIM and the company 2Play are pleased to announce that they have signed a Promoter Agreement for the FIM X-Trial World Championship (indoor trial). The Agreement, initially for five years, will take effect for the 2017-18 season starting this autumn. This partnership is in line with the FIM’s strategic objectives for the development of the quality of its World Championships and the modernisation of its organisation. In addition to the X-Trial des Nations, the 2017-18 calendar should feature between 7 and 8 events.

The FIM President Vito Ippolito welcomes the Agreement: "For some time now, the FIM Board and the Trial Commission have been exploring ways of reinvigorating our indoor Trial World Championship. The new concept put forward by 2Play and their ideas for the sporting side are very appealing. Also, the considerable experience of Bernard Estripeau and Josep Vergel in the world of motorcycling sport and of Trial in particular impressed us as a solid indicator of their ability to carry off the growth of this spectacular discipline. The FIM looks forward to working with 2Play for this new chapter in the history of X-Trial.”

2Play Event Production Manager Bernard Estripeau added: "This new working relationship with the FIM and 2Play will enable us to launch a new concept for X-Trial. The rules will be a total innovation in our discipline. This new system will enable us to change the concept of the zones and open up the sport to a larger number of riders. We also hope to attract young riders into the discipline. Altogether, the new concept should make the sport more spectacular and dynamic.”