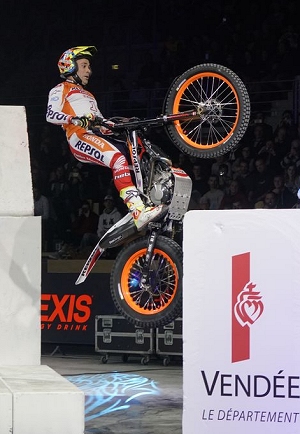 Toni Bou got the new era of the X-Trial FIM World Championship off to a perfect start with victory in Vendée. The reigning World Champion, took the first win of a season that promises to be exciting, close-fought and spectacular. After tying Jaime Busto in the second qualifying session, Bou got the better of his young former teammate in the Final but Busto claimed his first X-Trial podium on his debut as a GasGas rider. Both riders got Vendée´s capacity crowd up on their feet and, along with the other competitors, provided top-quality action throughout.

The Final itself was only decided in the last ride of the night, but it was Bou who held the early advantage after a mistake by his head-to-head rival in Section Two. Bou completed the same section without dropping a mark and, although he went on to lose ground in Section Four, did comfortably enough to hold on for victory.

The final step on the podium was claimed by Adam Raga, recovering from a dramatic crash in the final section of the first lap that saw him clatter to the ground spectacularly. He made it through to the second session nonetheless, but as the first rider to tackle each section he was unable to match the group winner Jaime Busto, who qualified at his expense and also eliminated Jaime Busto.

James Dabill also enjoyed a night of recovery, claiming an excellent fourth position having fought back from a five-mark score in the opening section of the night. Arnau Farré (Vertigo), Matteo Grattarola (Montesa) and Jorge Casales (Vértigo) were eliminated in Round One, with home rider Benoit Bincaz impressing in the preliminary phase and delighting the crowd with a hard-earned sixth position.

Toni Bou (1st Position): “There is no better way to start the defence of my X-Trial World Championship title than with victory in what was a challenging X-Trial, particularly my fight with Jaime in the Final where I had to be at my best. It´s constantly harder to keep my number one position, so I am pleased to have opened the new era of the World Championship with a victory. The Championship has started in a great way in every way as you saw today, a great show on the track, the stands full of supporters and a brilliant organisation.”

Jaime Busto (2nd Position): “It´s been a great debut with a new team and on a new bike. I felt comfortable right from the start, and making it to the Final is the result of excellent work from the whole Gas Gas team. I tried my best to make things difficult for Toni right to the last moment, and I´m happy with the result, my riding and the atmosphere in Vendée today."

Adam Raga (3rd Position): “I had a scary moment at the end of the last section on the first lap because I lost control of the bike, and it was a big hit. Thankfully I wasn´t injured, and I rode well in the Semi Final, even if a place in the Final got away from me by a point. Considering how the trial started, making it to the podium is a good result.”

The second round of the X-Trial FIM World Championship will take place in Montpellier on 13th January.