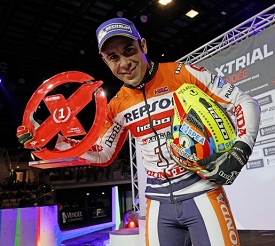 Repsol Honda Team rider Toni Bou clinched victory in Vendée, France at the opening round of the 2018 FIM X-Trial World Championship. The rider beat Jaime Busto in the final.

With barely a few weeks passed since the end of the 2017 campaign, the 2018 competition calendar got underway with the first trial of the FIM X-Trial World Championship in the French town of Vendée, where Repsol Honda Team ace Toni Bou rode to an overwhelming triumph, dominating every phase of the event.

In the first qualifying round, Bou laid down the gauntlet, collecting just a single penalty point in the six-section course, as the eleven-times champion sauntered through the relatively low-difficulty obstacles. The second phase of the competition, held in the Vendespace Sports Complex, saw Toni Bou included in a group with James Dabill and Benoît Bincaz, with only the top-finisher going through to the final. The Montesa Cota 4RT rider replicated the near perfect first lap to comfortably seal a place in the final.

The final turned out to be a face-off with former team-mate Jaime Busto, whose six points were no match for the incumbent champion who picked up a solitary penalty mark en route to victory.