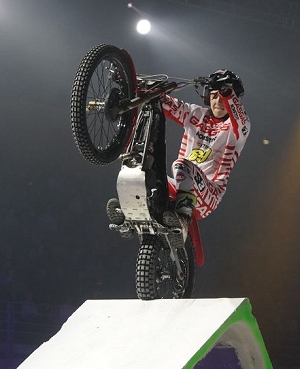 The Vendéspace displayed the sold-out sign the day before the start of the X-Trial World Championship, a contest that this year began with significant changes in the format of the competition, triggered by the arrival of a new promoter, the company 2Play.

Just two days after their presentation as new riders for the Gas Gas Trial Factory Team of the Torrot Company in Bilbao, Jaime Busto and Jeroni Fajardo had their first taste of the X-Trial world Championship, both competing in the same group to decide the qualification process under the new rules. Firstly the riders were faced with a qualifying phase that put the six best riders through to the second phase with both Busto and Fajardo passing with impressive performances.

In the second session, Busto confirmed his super-quick adaptation to his new Gas Gas Trial 300. The young star recorded the best score in a complicated group formed together with him by his team-mate Fajardo and Adam Raga. This was a result that made sure of his ticket straight to the grand final. Unfortunately, a mistake in the penultimate section forced Fajardo out of the final. The girona rider closed this first round of the X-Trial World Championship with fourth place.

It was Toni Bou and Busto who had to face each other in the final six sections of the evening. A circuit in which an unlucky five for the Gas Gas rider saw him have to settle for second place. To come second, however, was something of an early birthday present for the young rider from Górliz, who turned 20 on the 4th of December.

JAIME BUSTO: "Reaching the final and getting up on to the second step of the podium is the best way to reward Torrot for the confidence placed in me by forming part of the GasGas Factory Trial Team. It has been a very good start to the World Championship. The zones did not have a too complicated level, so in the first round I was able to qualify in the second position and then, in the next, although my rivals were very good, I fine-tuned my riding and I managed to pass through to the final. Toni [Bou] was very strong as always and we made a small mistake at the beginning, in the second zone, which prevented us from fighting for the final victory. However, starting the Championship this way is incredible for us. The zones were not extremely difficult, which meant that in the classification a high price would be paid for any mistake. However, we have been riding at a great level and in the end we finished second, a very good start for us and all our team in the X-Trial World Championship."

JERONI FAJARDO: "The truth is that I had very good feelings. In the first round, an initial mistake made it difficult for me to get into the race as it put a lot of pressure on me. I knew I couldn’t make any more mistakes, but in the end I got a third place, getting through to the next round. The second elimination phase was very hard. Jaime and I were in the same group, with Adam [Raga], and the truth is that the fact of leaving last gave me a slight advantage. In the next-to-last zone, I noticed that the crankcase touched an obstacle. The commentator said that, after that, we were in a tie with Adam [Raga]. So I took a risk to finish the area with a better time than him but it just didn't work out and so finally I finished fourth. It is always better to get a podium, but this time it was just not to happen for very little. Despite this, my feelings about the new GasGas Trial 300 have been very good. We were ahead and I am sure that good results will not be long in coming for our team and for Torrot. "