Third place for Raga at X-Trial Round 1 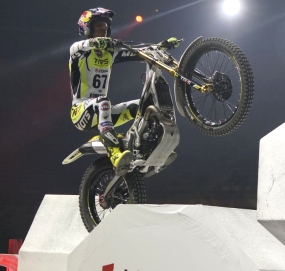 Adam Raga finished third in the first race of the new X-Trial World Championship, where an uncharacteristic and nasty crash prevented him from being higher in the final standings.

Two weeks after the last race of 2017, the 2018 season officially began with the X-Trial World Championship in the French town of Vendée, where Raga added an important podium in a demanding race. In the qualifying round Raga was sixth, a result affected by a crash in the last section from more than five meters high after losing control of his TRRS. Adam recovered courageously and finished second in the last qualifying round of his group, a good result that, however, prevented him from moving on to the final round, where this year only the top two riders of each group participate.

Raga: ""Finishing with a podium here and ending just one point away from entering the final round is a good result for me, especially considering the crash I had in the last section of the classification where I was lucky not to have been injured. The performances are good and we will keep fighting to improve in the future events. "