X-Trial Moves On To Barcelona 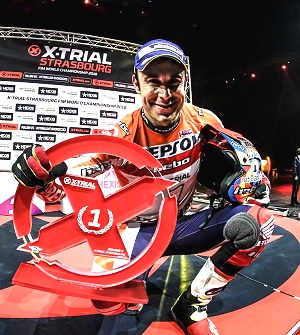 The Palau Sant Jordi will once again be the venue for the 41st edition of the Barcelona X-Trial, the most historic event in the sport, which takes place this Sunday, 4th February. The fifth round of the 2018 season in the X-Trial FIM World Championship will open the second half of the calendar, after an intensive month of January that has seen the riders tackle successive weekends of competition in Montpellier, Toulouse and Strasbourg. The Barcelona X-Trial is always a reference-point for the sport, and the one that every contender wants to win, having been staged on no less than 40 occasions since the first event in January of 1978.

Toni Bou (Repsol Montesa Honda) arrives at his home race in the Palau Sant Jordi as the Championship leader, having won each of the opening four rounds and taken a total of 84 points, 24 more than his nearest rival Adam Raga who is the only rider other than Bou to have made the podium in each 2018 event.

Directly behind the lead duo are youngsters Benoit Bincaz (Scorpa), Miquel Gelabert (Sherco) and Jaime Busto (Gas Gas) who each have a single podium appearance to their name.  Spaniard Busto opened the campaign with second position in Vendée and has since been joined in the record books by Bincaz, third in Toulouse, and Gelabert, impressively runner-up last time out.

James Dabill (Beta) is the last of six different riders to have appeared on the podium in what has been an unpredictable season, but after two challenging rounds the Brit has dropped to sixth in the Championship Standings.

Completing the line-up in Barcelona are three locally based riders.  Jeroni Fajardo (Gas Gas) is nominated after only narrowly missing out on a place in the Final in Strasbourg, Japan’s Takahisa Fujinami (Montesa) returns after missing the fourth round, and youngster Arnau Farré (Vertigo) joins them for his second X-Trial appearance.

11-times World Champion Toni Bou, who has already won in Barcelona on eleven occasions, is the favourite to do so once again: “Arriving here in Barcelona after four wins is incredible.  It’s a very special event in which we all go out with a lot of pressure to put in a great performance, because of the stature of the event and the thousands of fans who will fill the stands in the Sant Jordi.  I am feeling gradually better after the injuries that have been affecting me for a couple of weeks, and I hope to continue improving in that regard to give one hundred percent and shine in such a great spectacle.”