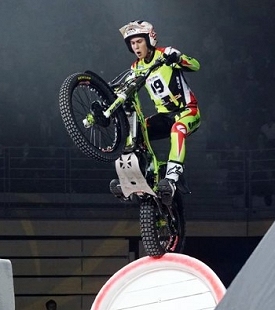 The breakage of the cruciate ligament in Vertigo youngster Arnau Farré’s left knee that took place at X-Trial Barcelona will necessitate a six to eight week period of recovery before he can return to competition.

The rising Spanish talent Farré recalls the incident that caused his injury in the Palau Sant Jordi: “It was in Section Two and just a question of bad luck.  After making a step, I lost balance and fell, but with the bad luck that putting down my left leg injured me.  In fact, as soon as I touched the ground I realised something had happened because I felt a crack.  I really wanted to ride well at home and in front of my people, but it wasn’t possible and it all ended shortly afterwards.”

The Vertigo rider is well aware of the stages of recuperation from this injury: “It’s been a really hard blow because I have a lot of months ahead of me before I will be back to 100 per cent.  In the short term, in a few days I will be operated on, and from there, doctors have told me it’ll be between six and eight months.  What is clear is that I mustn’t rush, but rather work to the maximum within what the doctors signal.  The most important thing is to get back to a perfect condition.”

Despite his immediate future, Farré is already thinking about getting back on board a bike: “According to the doctors, by the end of September I will be able to ride and, although I don’t want to set myself specific targets, I want to be back to fitness by the next X-Trial FIM World Championship.  I know I am capable and have the right level to do a good job, and I hope to be able to show that when I recover from this bad injury.”