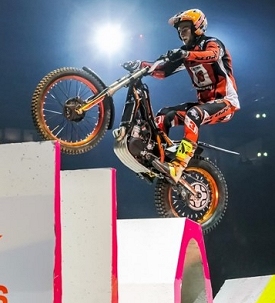 Benoit Bincaz has been a revelation in the 2018 FIM X-Trial World Championship.  The youngster made his debut in the series this year, but currently sits third in the Championship with one podium finish already to his name thanks to his consistency after three fourth-position returns.

A visit to Paris is a special one for the young Frenchman: “I can´t wait for this round, which is very important for me with the support of the crowd.  I want to be at my best in front of them and specifically at the AccorHotels Arena which is a special venue, a scene of great artists and sportsmen, and one in which it is a dream and an achievement to compete.  I will have the support of thousands of spectators and I don´t want to disappoint them, so I won´t rule out finishing even higher than third.”

Just days from the opportunity to compete in his country´s capital, Bincaz is also aware of this round´s importance for the Championship: “I am third with ten points ahead of my nearest rival, and I think that should allow me to ride without too much pressure and hopefully replicate my riding from Toulouse last month.  Before the season I was already convinced that I could do great things in the Championship, but I wouldn´t have expected to be third within two rounds of the end.  I am very satisfied with how things are going and hope to maintain this level in the future.”

The Scorpa rider encourages his fans to support him on the 17th March in the AccorHotels Arena in Paris: “Spectators are enjoying the new competition format, which is really important.  The arenas are full, the light and sound show is exceptional, and I think us riders are competing at a very high level.  The combination is perfect and offers a high-quality show that is encouraging fans to continue following each round.”