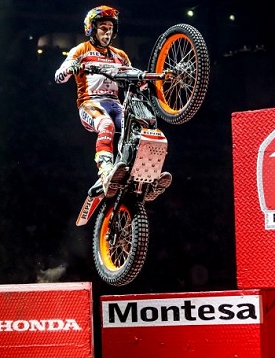 Repsol Honda Trial Team riders Toni Bou and Takahisa Fujinami are all set for the sixth round of the FIM X-Trial World Championship to be held at the AccorHotels Arena in Paris.Championship leader, Bou will return after his back injury to participate in the Paris X-Trial. The Repsol Honda Team rider had taken a very serious blow at an event in Le Mans, France on 17 February.

Today, Thursday, Toni Bou once again donned the team colours and boarded the Montesa Cota 4RT after almost a month out of action after the Le Mans incident. Bou reported back with positive sensations and has decided to line up for the AccorHotels Arena start-line in the French capital this Saturday at 20:00hrs. The prize-giving podium is scheduled for approximately 23:00.

After the cancellation of the competition in Seville, the X-Trial of Paris will be the sixth event in the championship calendar. Bou has commanded the first five dates and holds a 31-point advantage over his second-place pursuer in the overall standings. Toni has competed on just a single occasion in Paris, back in 2012 where he took the victory.

Lining up alongside Toni Bou will be Japanese Repsol Honda Team rider Takahisa Fujinami. This will be Fujigas’ fourth participation in the X-Trial World Championship as the rider goes in search of both a solid performance and qualification for at least the semi-final.