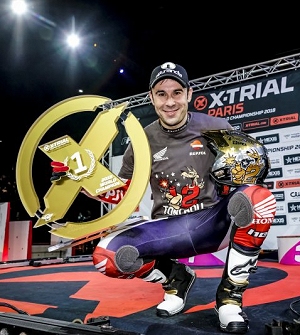 Toni Bou posted fifth in Paris as he claimed the overall 2018 X-Trial World Championship victory. The Repsol Honda Team rider took the 12th indoor title triumph when one of the dates, whose points counted towards the championship, was cancelled shortly before the start of the sixth round of the season.

Despite not being anywhere near 100% after a serious back injury, Toni nevertheless arrived in Paris as a clear favourite after having triumphed in all the previous events this season: Vendée, Montpellier, Toulouse, Strasburg and Barcelona.

The current champion had to settle for the fifth position after completing two laps of the six-section course in the AccorHotels Arena in Paris. In the first qualifying phase of his 81st indoor trial, the Montesa Cota 4RT rider performed a near perfect lap, picking up a mere three penalty points. In the semi-final phase, in which the best from each group of three makes the cut, Bou had difficulty getting going and was clearly being hampered by the injury, being unable to perform as he had done in the first phase. With a final tally of 16 penalty points, Toni Bou finished in a notable fifth position in the final standings, after 27 days out of action due to the injured vertebrae.

Shortly before the start of the Paris X-Trial, the FIM announced that only one trial would remain before the close of the 2018 FIM World Championship. The final event is scheduled for March 29 in Budapest.