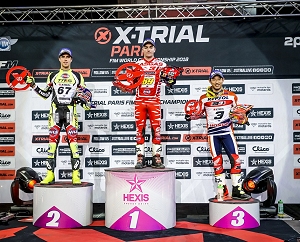 Paris was the scene of the sixth round of the X-Trial World Championship, and this was an event that Jaime Busto is unlikely to forget. The young GasGas Trial Factory Team rider has chalked up his first victory in the X-Trial World Championship by beating Adam Raga in a thrilling final. The Basque rider has achieved the first triumph in this contest for GasGas since the rescue by Torrot in 2015. Jeroni Fajardo finished in seventh position.

The GasGas Trial Factory Team riders were paired in the same group in the first round. Jaime Busto scored 10 points, while Jeroni Fajardo got 12.

In the second round, Jaime Busto, was competing against Toni Bou -the World Champion after the cancellation of the X-Trial in Seville and also with Takahisa Fujinami. After a solid performance, Busto got a total of 8 points and made it to the grand final, which he competed in against Adam Raga.

In a very closely run final, Busto managed to handle the pressure perfectly, scoriing only 3 points against Raga's 6 whioch included a decisive 'five' in the fifth zone. After this brilliant performance, the GasGas rider was able to chalk up his first victory in the X-Trial World Championship.

With this result, Jaime Busto climbs in the general ranking to the fourth position, just two points behind the third classified. Jeroni Fajardo is sixth. The next round of the X-Trial World Championship will be held on March 29, in the Hungarian city of Budapest.