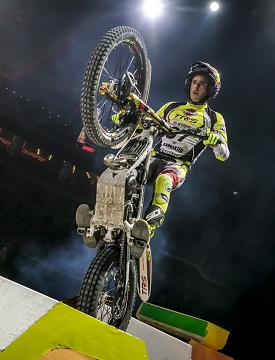 The X-Trial World Championship visited Budapest, Hungary for the first time this week and it was Adam Raga who returned to the top in a Trial that was only decided in the final section. The 4-times World Champion met Jaime Busto (Gas Gas) in the Final for a second successive round, but after defeat at the youngster´s hands at X-Trial Paris, Raga took his revenge in Budapest.  The TRS star finished top in both Round One and Round Two of the heats before snatching victory in the Final, but he could never rest easy as Busto took the X-Trial right to the last section.  Each rider came into the deciding Section Five on just a single mark and with the Hungarian crowd, witnessing X-Trial for the first time, on the edge of their seats.  And it was Raga who took victory as, after a five-mark score for direct rival Jaime Busto, he was able to make it through the same section with just two dropped marks.

Benoit Bincaz (Scorpa) proved his consistency as the campaign´s best newcomer, securing a second podium finish of the campaign with a gradually improving performance in Budapest.  His Round Two ride was excellent, as with just eight marks he finished seven clear of his nearest rival for third on the night: James Dabill (Beta).

Miquel Gelabert (Sherco) and Takahisa Fujinami (Repsol Montesa Honda) completed the top six finishers after strong returns in Round One, where they had claimed third and fourth places respectively.

Newcomers Luca Petrella (TRS) and Gabriel Marcelli (Montesa) were early eliminees, with Alexandre Ferrer (Sherco) also dropping out in Round One.

Despite X-Trial visiting Hungary for the first time, almost 4,000 fans enjoyed the spectacle in the Budapest SportArena.

Adam Raga (1st): “It was a great win and the best way to close the Championship.  I dominated the first two Rounds, and won the Final as well, although that wasn´t decided until the last section because Jaime made things very difficult for me.  This result consolidates the strong finishing straight that I have put in towards the end of this Championship, and shows that my hard work in recovering from injury was well worth it.”

Jaime Busto (2nd): “This second place, after a win in Paris, is a great result.  I decided to take a risk in the last section to try and take the win, but it didn´t work out.  Nonetheless, I have got something from nothing really, because I didn´t ride particularly well on the first lap."

Benoit Bincaz (3rd): “Returning to the podium in my rookie season is a strong result.  I rode at a very high level today, above all in Round Two where I secured my place on the podium.  Fourth position in the World Championship with two podium finishes is a satisfactory end to my first X-Trial season.”

The X-Trial calendar reaches its conclusion on the 6th April, when the Palais Nikaia in Nice will welcome team competition with the 2018 X-Trial of Nations.