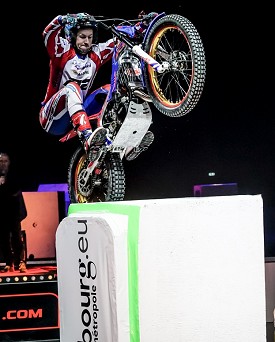 James Dabill will represent the UK alongside Jack PriceThe X-Trial season comes to its official conclusion on 6th April at the Palais Nikaïa in Nice with the annual X-Trial of Nations, where the top national teams will attempt to de-throne title-holders Spain.

The event will also see 12-times X-Trial World Championship Toni Bou back in action following his withdrawal on doctor’s orders from X-Trial Budapest.  The Repsol Montesa Honda rider makes his return in time to defend the gold medal he won in the 2017 X-Trial of Nations. On that occasion, Bou was joined by Jaime Busto on the top step of the podium, ahead of Great Britain’s James Dabill and Jack Price, with Benoit Bincaz and Alexandre Ferrer of France taking bronze.

In 2018, Bou will be joined in the Spanish team by Miquel Gelabert (Sherco) who makes his debut in the X-Trial of Nations on the back of an excellent individual season that saw him finish fifth overall and second place at X-Trial Strasbourg.

The other 2017 podium finishers field unchanged line-ups.  Host nation France line up Benoit Bincaz (Scorpa), the top-performing 2018 rookie who finished fourth in the X-Trial World Championship, and his regular teammate Alexandre Ferrer (Sherco).  James Dabill (Beta) and Jack Price (Gas Gas) will also hope for a return to the X-Trial of Nations podium, but teams from Italy formed by Matteo Grattarola (Montesa) and Luca Petrella (TRS) along with inexperienced Germany with Franz Kadlec (Gas Gas) and Max Faude (Beta) will attempt to make that as tough as possible.

The Palais Nikaïa stages the X-Trial of Nations for the fourth time, having last hosted the competition back in 2016.