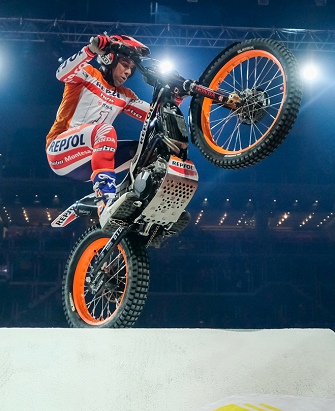 Reigning X-Trial World Champion Toni Bou (Repsol Montesa-HRC) is the man to beat at the second round of the 2019 campaign, having taken the early advantage at the opening event of the season in Budapest.  His latest appearance at what is his home X-Trial will be a fourteenth participation in Barcelona, where he has already claimed twelve victories.

Bou arrives full of confidence for this special event: “I am looking forward to Barcelona and I know that I am certainly capable of another win, but the pressure will be very high and I will have to get everything right in front of such a knowledgeable and demanding crowd.  It is my home round, so of course it’s great to be a part of.  But it will certainly be very difficult and I’ll have to give it 100% to win again.”

Behind Bou, Adam Raga (TRS) has the next best record in the Catalan capital, with five victories in seventeen appearances.  The reigning world number two still occupies the second place ranking after his runner-up position over a week ago in Budapest.  “The Barcelona Round is always an extra motivation.  Everyone wants to win there, and I’m no exception: I would like to add another victory to my record, since I have already won the event on several occasions.  I feel in good shape and am looking forward to the competition.”

Jeroni Fajardo (GasGas) will aim to repeat his recent podium exploits, having taken the third step of the podium at the Palau Sant Jordi last season, and followed it up with third place in Budapest.  His rivalry with teammate Jaime Busto, who he dispatched in the Runners Up Final last time out, is set to continue in Barcelona.

The line-up of the Championship’s permanent riders is completed by Benoit Bincaz, who made a successful debut for Beta with fifth in Hungary, and Miquel Gelabert (Sherco), who returns from a foot injury.  Meanwhile the nominated riders selected to compete at X-Trial’s so-called “cathedral” are Jorge Casales (Vertigo), who enjoyed a career-best sixth in Budapest, Takahisa Fujinami (Repsol Montesa HRC), who holds the all-time appearance record in Barcelona at eighteen, and at the other end of the experience scale new Beta signing Luca Petrella.