X-Trial Series Moves On To Granada 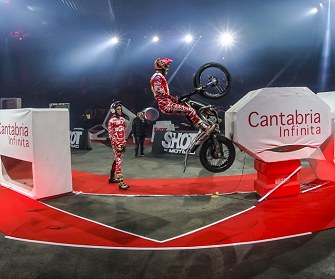 This weekend the FIM X-Trial World Championship returns to a venue where it has very prominent roots as the southern Spanish city of Granada hosts the fourth round of the 2019 series for the first time in ten years.

The main talking point of this year's Championship has been how closely matched the top riders are, especially in the recent X-Trial Barcelona and X-Trial Bilbao, both of which were only decided in the last Section of the Final.  Toni Bou (Repsol Montesa Honda) took the honours at X-Trial Bilbao while Adam Raga (TRRS) was the winner in his home event two weeks before.

Bou has high hopes ahead of Round Four.  "I am really looking forward to competing in Granada.  I have great memories of the city and I am sure the fans there will enjoy a great competition considering how tight the fight is between Adam and I.  So far I have won two rounds and he has won one, so everything is still to be decided and I know he will give everything this weekend" he said.

Bou and Raga are separated by just five points in the World Championship standings after three rounds and everything points to the Palacio de Deportes Granada being the venue for another head-to-head between the two - but they are not the only candidates for the top positions.

Frenchman Benoit Bincaz (Beta) put in a spectacular performance to take third place in Bilbao, while Gas Gas riders Jaime Busto and Jeroni Fajardo are third and fourth in the Championship respectively and will each be looking for a second podium finish of the campaign.  Miquel Gelabert (Sherco) meanwhile is still striving towards 100% fitness after a foot injury that prevented him from starting the season opener in Budapest.

In Granada there will be two Gelaberts on track as Miquel's younger brother Aniol (Scorpa) makes his X-Trial debut, joining a group of youngsters including Gabriel Marcelli (Montesa) who made a great 2019 debut in Bilbao, and Norwegian Sondre Haga (TRRS).

All of them will compete from 8pm this Saturday in Granada, which is also the European City of Sport for 2019.