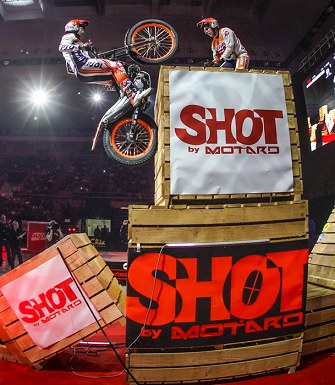 Toni Bou (Repsol Montesa Honda) put in an exceptional performance as the FIM X-Trial World Championship returned to Granada to add his third victory of the season in front of 4,000 spectators. The 12-time World Champion put in some firm and aggressive riding dropping just two marks in Round One, one in Round Two and dominating the Final against Jaime Busto (Gas Gas). Busto never had a chance in his first Final of 2019 as he failed the first section while Bou dropped two marks and then scored three consecutive cleans to put the victory beyond reach.  Busto suffered four failures on his lap and had to change bikes after a fall to score 23 compared to just 7 for Bou.

Adam Raga (TRRS) defeated Benoit Bincaz (Beta) in the Consolation Final.  The first section was the difference as Bincaz failed at the first obstacle while Raga scored just one mark on the same section, and the pair picked up just one mark each for the rest of their laps.  Raga had struggled in Round One and only finished fifth which meant he met Bou in the Round Two heats where he finished five points behind the World Champion.

Miquel Gelabert (Sherco) and Jeroni Fajardo (Gas Gas) were eliminated in Round Two despite a good showing to take fourth and third respectively in the first round.

Young guns Sondre Haga (TRRS), Aniol Gelabert (Scorpa) and Gabriel Marcelli (Montesa) were the riders eliminated in Round One.  Marcelli was only one mark away from qualifying for Round Two, while the younger Gelabert made a decent debut on the X-Trial stage alongside his brother.

Toni Bou (1st): “I felt great today and was back to my most aggressive and effective riding.  It was a very special night and I felt very comfortable although the pressure was very high when I was facing Adam Raga in the second round.  This result is also very important for the Championship although we know it is not over yet.”

Jaime Busto (2nd): “I am happy because I rode well in the first two rounds and made the final for the first time this year.  In the final I did not ride as I wanted and also had to change my bike so I did not feel comfortable.  I hope this good result marks a turning point for the rest of the season.”

Adam Raga (3rd): “The podium is a good result and I was satisfied with my riding.  It was a shame I could not qualify for the Final, but staying in the top three is essential for me to be able to fight for the title.”