Can The Toni Bou Machine Be Stopped In France? 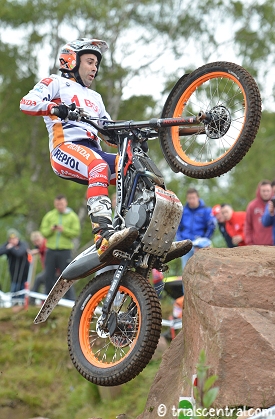 This weekend at the French Grand Prix, the 2015 FIM Trial World Championship will reach its fifth round of nine, with no one thus far having been able to stop reigning champion Toni Bou – Repsol Honda in his tracks. Bou heads the general standings by a healthy and almost worrying thirty-four points before the series has even reached its halfway stage. Toni’s uninterrupted tally of one hundred and sixty points reflects perfectly his total domination of the 2015 campaign to date, with him having taken eight wins from eight starts.

Sooner or later the inability to topple Toni is sure to demoralise his rivals and none more so than Adam Raga – Gas Gas who like in more recent seasons has really taken the fight to his supreme compatriot. Whilst Raga, along with the rest of the field had no answer to Bou on the second day of the British GP, twenty-four hours earlier Adam had again pushed Bou hard before finally having to settle for second spot once again. Outside of his five runners-up positions, and one third place in the Czech Republic, Raga has only twice failed to feature on the podium this season to maintain his status as Toni’s nearest challenger.

Jeroni Fajardo – Beta remains third in the title race and used the British Grand Prix to stretch his advantage in the points table over Albert Cabestany – Sherco who has now moved up to fourth overall in the rankings following Takahisa Fujinami’s – Repsol Honda worst showing of the season so far at the Nord Vue venue. Other than Raga, Fajardo is the only other rider who has threatened to break Bou’s unbeaten run and is currently enjoying one of his best season’s ever and could just be the man to stop Toni in his tracks as the battle shifts to France this weekend.

Cabestany and Fujinami are yet to discover the form of previous years and have struggled to find any kind of consistency over the opening four rounds. Takahisa continues to be fighting the effects of his long-term knee injury, whilst Albert reports that he is lacking in confidence, but can not pin point the actual problem why that is so. Both veteran campaigners will continue to have their work cut out as they try to keep rookie Jaime Busto – Repsol Honda at bay. Two more top six places last time out confirm that Busto has now started to establish himself amongst the front-runners on a regular basis.

James Dabill – Vertigo aboard the all new Spanish machine, home favourite Alexandre Ferrer – Sherco and Germany’s teenage sensation Franz Kadlec – Beta currently round out the top ten respectively in the championship table and will all be hoping to feature at the sharp end of the results and cause an upset of some kind up against their peers in France this weekend.

The competition in the FIM Trial World Cup class is simply too close to call with four different winners in the four rounds to date. Much to the delight of the home fans French rider Quentin Carles de Caudemberg – Beta leads the championship coming into his home GP. Without a win since the Czech Republic Carles de Caudemberg will be desperate to regain his winning form in Andon. Spain’s Miquel Gelabert – Sherco remains his closest challenger without having recorded a single win, but holds his position thanks to his sheer consistency in a class where that is not common place. Britain’s pairing of Jack Price – Gas Gas and Iwan Roberts – Beta currently sit third and fourth in the standings, each having tasted the winners champagne. Roberts was a double victor last time out and will again be a man to watch at the French GP.

Italy’s Marco Fioletti – Beta is the equivalent to Bou in the FIM 125 Cup, with him having won seven out of the eight counting days to date. French rider Maxime Varin – Scorpa continues to be his nearest rival, but will need to start notching up the victories starting this weekend if he is to hunt Marco down in the points race. Jarmo Robrahn – Beta from Germany returns to the entry list after his one off strong showing in the Czech Republic so far. He along with some currently unranked French riders, who will enter the fray, may just shake up this division in Andon this weekend.