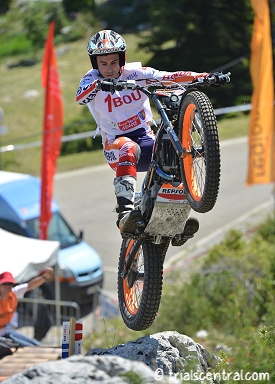 It was onwards and upwards for Toni Bou, with a ninth consecutive victory this season after the first day in Andon, France. Astride the Montesa Cota 4RT, Bou set out his stall early with a fine first-lap display that immediately set up a clear advantage over his closest rivals. The Honda star had practically finished with the competition by the end of lap two, with a very low score amid the slippery, yet not technically demanding sections of the Andon course. In spite of a fault in the first section of the final lap, Bou was nevertheless able to keep his adversaries in check and even managed to improve on the points in the sections which had previously proved the most taxing.

Takahisa Fujinami showed a fine performance, even managing to lead the scoreboard early during the first lap. ‘Fujigas’ in a race well-suited to his style of riding, put in a high-level ride that saw the Japanese rider improve on his marks over laps two and three which proved enough to secure the third step of the final rostrum.

Jaime Busto was able to overcome a disastrous second lap which left the Basque rookie battling for sixth overall position. Busto had begun well, with virtually equal marks to the first five riders, but a series of errors raised the points on the scorecard considerably. An improved final lap meant that the rider finished in seventh.

Sunday sees the second and final day of the French GP in Andon. Riders will have to tackle the same three-lap course as today, which will include twelve sections.