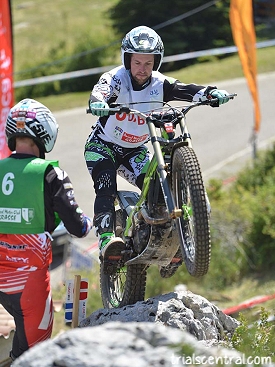 After just a one week break the 2015 FIM Trial World Championship came back to life for the fifth round of the series which was held in the French mountain resort of Andon, located high in the hills but just inland from the coastal city of Nice. With this week's sections being found over one thousand four hundred metres above sea level, it was yet another new test for the prototype Vertigo Combat in the hands of factory rider James Dabill, who on this occasion was also joined for the first time by his teammate Francesc Moret.

Although the off season ski area provided the perfect terrain for the French GP, there was little variation in the hazards with each featuring the huge sharp white rocks that define this region. The only change in the sections were that some were more exposed than others, with the later group of hazards nine through to twelve benefiting from the shade of the alpine trees as the sun shone brightly and warmly on both days of competition. Andon last hosted its one and only previous Trial GP back in 1989.

The high altitude venue proved to be a tough test for both Dabill and the prototype Vertigo Combat as he and the team worked hard but within the short time allotted during Friday's official training session to find the correct settings to offset the loss of power associated with this kind of scenario. Vertigo and the Combat have never previously experienced this particular set of conditions, whereas the other teams have many years worth of data and special parts to refer to.

By his own admission James struggled to adapt during Saturday's Trial to the new bike set up and power delivery and had to fight his way through every section in order to eventually record a result inside the top ten. The day was made even more difficult as Dabill's main minder Josh Sprintall injured ligaments in his ankle whilst fulfilling his duties.

This injury forced a change in personnel on Sunday morning, with Josh side lined and another member of the Vertigo team having to step into his position. Overnight adjustments by the team's engineers, based on Saturday's findings, gave Dabill every confidence of a better showing on day two that took place in equally hot and sunny conditions as twenty-four hours earlier. However there was to be no miracle for James as he again endured an indifferent performance in the rocky hazards. Despite his and the team's best effort he could only manage tenth position once again.

Making his debut on the prototype Vertigo Combat in the FIM Trial World Championship Francesc Moret placed fourteenth and twelfth respectively over the two days of competition.

Speaking after the event Vertigo Sports Team Manager Dougie Lampkin said. "I remember from my own riding career how difficult it is to take a new bike to the first high altitude Trial and get a good set up. 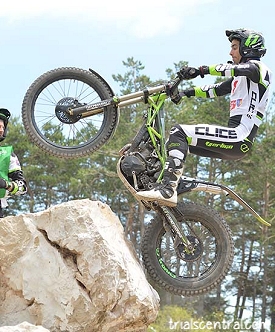 The Vertigo Combat remains a prototype still at this point, and the first season was always going to be about taking it to different places and working to get the best performance out of it. We now have a test planned before next weekend so we can hopefully put in place for the next GP what we have learned in France and be able to see some kind of marked improvement."

"Josh's injury is a big blow to James as he is an important part of the team and he is used to working closely with him. Hopefully he will be OK for Andorra next weekend, but we will have to wait and see."

Reflecting on the weekend Dabill said. "It has been every bit as tough as we expected up here in the mountains. The Team have done their best to deal with the altitude, but it is obvious we need to do some more testing to get the package working better at these high venues. With the test planned ahead of Andorra I am sure things will be much better next weekend."

Round six of the 2015 FIM Trial World Championship will take place high in the mountains of Andorra next weekend.