Can Albert Bounce Back In Andorra? 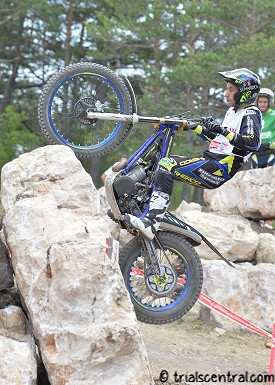 After a slightly mixed showing for Albert Cabestany - Sherco in the 2015 FIM Trial World Championship to date, the experienced campaigner will arrive in Sant Julia de Loria, Andorra this weekend with hopes of a return to his best form. The steep slopes of the Pyrenees mountains in the small principality have proved a happy hunting ground for Albert, who turned thirty-five just last week, in previous seasons with the Sherco factory rider having notched up three of his eight career GP wins in Andorra. His victories at this lofty venue coming in 2002, 2006 and his latest in 2012.

Cabestany heads into round six of the 2015 FIM Trial World Championship currently holding fifth in the general standings and with third position being his best GP result to date, whilst the second day in the Czech Republic saw his worst showing thus far when he placed sixth on that occasion due to a small problem with his bike. A regular podium finisher last season Albert is now looking to create that same level of consistency in 2015 and has work to do if he is to be ranked third overall in the World as he was at the end of 2014.

Speaking ahead of the GP in Andorra this weekend Cabestany said. “It is true to say that Andorra has been a good round for me in the past. I like the place, as it is like a home round for me in many ways and is often closer to my house than the Spanish GP can be in some years. Because of this I normally bring with me a lot of support with fans, friends and family making the short trip across the border from Spain.”

“I am fighting hard to catch Jeroni (Fajardo) in the general standings, but I know it is going to be very difficult. In the last rounds we have been close to matching each other, but the problem is that I gave him a lot of points at the opening GP in Japan, and since then I have been trying to recover those points.”

“Obviously my goal is to regain third in the championship, and whilst it is not going to be easy, we still have enough rounds remaining for me to move up to the next position. The top two positions are out of reach, but I have the chance to be inside the top three again if I can be on or close to the podium in all rounds from now to the end of the season.”

“The high altitude is always a problem for all the bikes in Andorra, but it is something we know having visited the same venue for many years now. I think it is clear to see from our results in the past, including my three wins, that we have a good set up. Each year the bike changes slightly so there is always more work to do to get the most power from the engine. Also as we know the weather can also change some things.”

“We will be ready to fight again for a good position, as I like the terrain and the sections that we normally find in this event. However because it is often dry and with lots of grip all the Spanish riders ride well in these type of conditions so it is never so easy to make a good result in Andorra.”

2015 marks Cabestany’s nineteenth season as part of the FIM Trial World Championship with him having made his debut in the series way back in 1997. Over the last almost two decades Albert has competed in two hundred and sixty GPs and only missed out on scoring points at fourteen of these. Over the same period he has recorded seventy-two podium finishes and taking Grand Prix victories on eight occasions on route to amassing nearly three thousand championship points in total. Cabestany’s highest overall ranking has been third, that achievement occurring three times – 2002, 2006 and 2014. Albert will continue to bid to make this happen for a fourth time in his long career as he heads to Andorra this weekend.