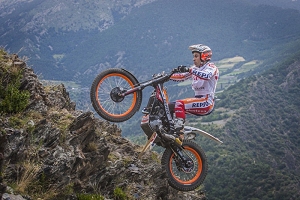 It was a gruelling and tough trial in Sant Julià de Lòria, Andorra, with a Repsol Honda Team unable to accomplish their original objective of a Toni Bou victory. The current world champion was frustrated in some of the sections, where several errors raised the scorecard tally to levels that left Bou incapable of overcoming the day’s eventual winner Adam Raga.

Toni Bou, nonetheless retains a 28-point advantage at the top of general rankings with three GPs still left before the season closes.

Bou’s brother-in-arms at Repsol Honda Team, Takahisa Fujinami, put in an improved performance compared to yesterday’s, although three consecutive errors on lap two minimized the possibility of a podium place. A fifth final place on the day in Andorra corresponds to his fifth position in the overall rankings.

Repsol Honda Team’s debutant Jaime Busto had it tough in the Andorra heights today. A sudden attack of lumbago saw the rookie seek treatment from the organization’s medical team and left the Basque rider unable to ride at full potential on the event’s second day, although Busto did succeed in coming away with a respectable sixth place.

Next port-of-call for the Repsol Honda Team will be at the same location next weekend, this time for the Spanish Trial Championship, the fourth date of the calendar. The next FIM Trial World Championship event will be the USA GP – the seventh round – to be held on 25th and 26th July.