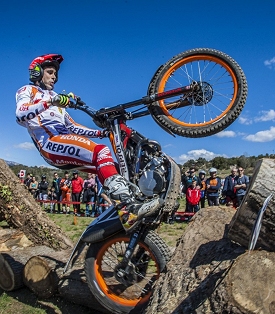 Repsol Honda Team rider Toni Bou grabbed second place on the day in the opening round of the FIM Trial World Championship held in Olvan and Cal Rosal, Barcelona.

Toni Bou had a satisfied grin on his face after the opening day of the world outdoor championship in Cal Rosal. Expectations hadn’t looked that bright in the run-up towards the trial after Bou had sustained a broken shoulder ligament in training, which played an important part today in the champion’s performance aboard the Montesa Cota 4RT.

In spite of getting through the first two sections mark-free, the Spaniard suffered severe whiplash that left him grimacing in pain. On lap two, Bou had started to accumulate marks due to a lack of strength in his right arm. The rider managed to put the physical issues behind him as he headed into the final stages, getting back into the fray and battling for a podium place, before finishing in second overall position, which leaves the flavour of victory on the palate. These 17 points could prove to be crucial in the fight for the championship.

Repsol Honda Team sidekick Jaime Busto had a bitter-sweet experience. After the first two laps the younger held a strong overall position. On the final round several errors were enough to force the young-gun out of a podium place.

Japanese rider Takahisa Fujinami, in spite of being currently on top form, made a few too many mistakes that raised the score on the mark sheet. Fujinami will be looking to improve on his overall seventh place tomorrow.