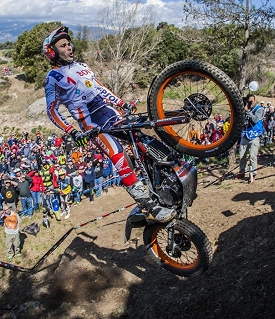 Even carrying a serious shoulder injury Toni Bou is still capable of pulling a surprise out of the bag. Today, in Olvan and Cal Rosal, the Repsol Honda Team rider was able to ratchet up the pressure and make off with the winning prize. Bou, albeit an off-form version, is now the new championship leader.

Mighty Bou is back. The rider took the bit between his teeth for day two of the opening round of the FIM Trial World Championship season in Olvan and Cal Rosal. The day was far from easy though for the Montesa Cota 4RT rider struggling all weekend with an injured right shoulder. Today, however, a determined Bou took a firm, error-free command of the event. Yesterday’s pain had eased up enough to enable the Repsol Honda Team ace to set his usual high standard in a GP which saw him accumulate less than half the marks of second place Adam Raga.

Jaime Busto, like team-mate Takahisa Fujinami, had a change of fortune today, notching up more mistakes than yesterday and making chances of a podium place ever more slim. The two had set out hoping for a productive season start but were unable to accomplish the task. The Basque rider repeated a fourth place finish with Fujigas pulling back positions but not reducing the points as much as he had previously hoped.

The next stop for the Repsol Honda Team will be the Japanese Grand Prix on 23 th and 24th April. Toni Bou will arrive in Motegi overall leader with 37 points, five more than Adam Raga and eight points clear of Albert Cabestany in third place. Jaime Busto is fourth in the standings with 26 and Takahisa Fujinami seventh with 20 points.